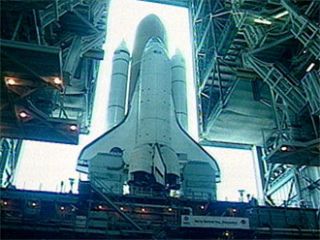 Discovery on the move after a delay Wednesday afternoon, April 6.
(Image: © NASA/KSC)

HOUSTON - After more than two years, NASA once again has a space shuttle on the launch pad.

NASA's space shuttle Discovery rolled into its launch berth at about 12:30 a.m. EDT Thursday despite a glitch in its massive carrier and a crack in its external tank insulation. The arrival ended a journey from the Vehicle Assembly Building that ran more than eight hours.

"The new card has been put in and it looks like it's giving us good readings," Rye told SPACE.com in a telephone interview.

The shuttle's rollout to the launch pad was already delayed for two hours Wednesday after engineers found the small crack in the foam insulation covering the orbiter's external fuel tank. Discovery was set for a Noon rollout to Launch Pad 39B before engineers detected the crack. After consulting with tank engineers at NASA's Michoud facility, shuttle officials decide to proceed with rollout at 2:00 p.m. EDT.

At 2:04 p.m. EDT the craft indeed began moving out of the Vehicle Assembly Building, according to a NASA statement.

The shuttle traveled the 4.2 miles to the pad at about 1 mph, carried on a 5.5 million-pound platform on caterpillar tracks that runs on a special road nearly as wide as an eight-lane highway.

NASA is gearing up for a mid-May liftoff. The mission to the International Space Station, named STS-114, has a launch window from mid-May through June, a period dictated by the station's orbital path.

"The crack is about the size as a hair on the lens of a camera," NASA spokeswoman Eileen Hawley told reporters at NASA's Johnson Space Center. The crack was located just above the intertank door on the rear of the tank, opposite the orbiter, Hawley said.

"They said they will be flying as is," Hawley said.

The launch is to be the first since the disastrous end of the shuttle Columbia mission two years ago, which was blamed on a chunk of foam that fell from the external fuel tank during liftoff and struck a wing. The tank has been extensively redesigned since that disaster.

"It doesn't sound like it's a major issue, but because the foam is a sensitive issue we want to make sure we're in a safe and right configuration,'' Rye said earlier Wednesday, when the crack was discovered.

By late afternoon, it became clear the discovery of the crack and the delay while engineers analyzed the problem illustrates a more safety conscious space agency.

"This is great. This is our job," said Stephen Robinson, an STS-114 mission specialist. "And people are discovering things."

Soichi Noguchi, another mission specialist, said, "I would say it's more business as usual. We're not just going to just be waiting in a room and looking out the window."

STS-114, commanded by veteran astronaut Eileen Collins, is expected to test a series of new methods and tools to enhance shuttle safety.

Earlier this week, NASA officials said they will track launch debris with more detail than ever before, using radar and more than 100 cameras spread across ground stations and high-altitude aircraft. If Discovery launches, flight controllers expect to get their clearest view of how much debris separates from the tank in the initial moments.

The Associated Press and other SPACE.com reporting contributed to this story.