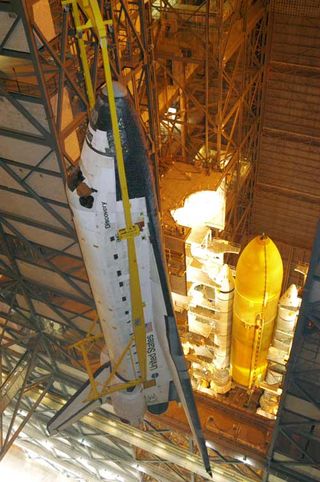 Suspended from an overhead crane in the Vehicle Assembly Building at NASA’s Kennedy Space Center, the orbiter Discovery is lowered toward the Solid Rocket Booster and External Tank (seen below) already stacked on the top of the Mobile Launcher Platform (MLP).
(Image: © NASA/KSC.)

HOUSTON – NASA officials will tracklaunch debris with more detail than ever before during the liftoff of the spaceshuttle Discovery later this year as the agency pushes to return its orbiterfleet to flight status.

Using radarand more than 100 cameras spread across ground stations and high-altitudeaircraft, flight controllers with NASA’s STS-114 mission aboard Discoveryexpect to get their clearest view of just how much debris separates from the shuttle’sexternal tank in the initial minutes after liftoff.

That’snot to say more debris will fall from the orbiter-external tank stack, justthat ground stations will now be able to see more than in the past, he added.

Set tolaunch no earlier than May 15, Discovery will be NASA’s first shuttlemission since the loss of seven astronauts aboard the Columbia orbiter, which broke up duringreentry in 2003 after sustaining critical damage during launch. A chunk of foaminsulation, shaken loose from Columbia’sexternal fuel tank, gouged a hole in the orbiter’s left wing leading edgeand allowed hot gases to seep inside the structure on reentry.

While NASAhas since redesignedexternal tanks to prevent major chunks of foam – like the suitcase-sizedpiece that doomed Columbia– from striking orbiters. But smaller pieces the size of marshmallowscould rain down on Discovery during liftoff and, depending where they strike,cause severe damage or remain relatively harmless.

“Theonly way to really know what’s going to happen in the real world is to gofly,” Muratore said, adding that his team ran through more than one billion computer scenarios and conducted live impacttests to prepare for a safe flight for Discovery. “It’s a verydifficult engineering problem.”

Shuttlemission managers are planning to conduct a debris verification review meetinglater this week to discuss the debris risk posed to the STS-114 mission, NASAofficials said.

Radarinstallations placed north and south of Discovery’s launch pad, and anadditional ship-board platform that will observe the shuttle as it passes overthe Atlantic Ocean, were successfully testedlast year during NASA’s launch of the Mercury probe MESSENGER.Meanwhile, engineers are outfitting two WB-57 aircraftwith turret-mounted cameras that will track Discovery’s launch from analtitude of 60,000 feet.

“Ihave a really high level of confidence that if we have any damage on thevehicle, we’re going to be able to detect it,” said John Shannon, shuttleflight operations manager, of the new imaging and radar systems. “I havezero doubt..nothing is goingto get by us. The question is what to do about it then.”

NASA hasspent the last two years trying to develop a set of repair techniques forastronauts to employ in orbit should their shuttle suffer damage to its thermalprotection system of tiles and reinforced carbon carbon(RCC) panels. Discovery will carry materials for some of the five methodscurrently on the table. During the spaceflight, STS-114 mission specialistsStephen Robinson and Soichi Noguchi will test tworepair techniques, including an emittance washapplication for tiles and a caulk-like substance to fill in cracks in RCCpanels.

Discoverymission planners are currently hoping to roll the orbiter, currently attachedto its external tank-solid rocket booster combo, out to its launch pad thisweek.