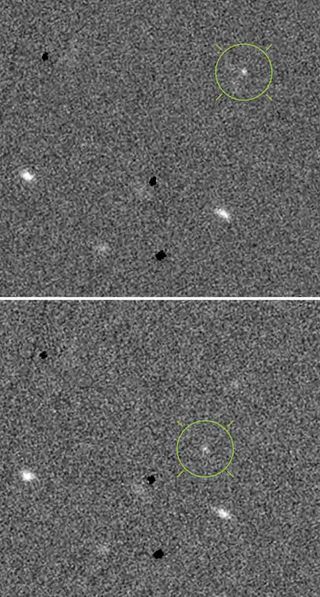 A new asteroid-hunting telescope has made its first discovery of a potentially threatening space rock: an asteroid that will fly near our planet ? but not hit it ? within a few weeks.

The asteroid is called 2010 ST3 and will come within 4 million miles (6.4 million km) of Earth in mid-October, astronomers said. It won't be back in the neighborhood for 88 years, they added. [Photo of the newfound asteroid.]

??There is a very slight possibility that ST3 will hit Earth in 2098, so it is definitely worth watching,? said astronomer Robert Jedicke, a University of Hawaii member of the PS1 Scientific Consortium, who is studying the asteroid data from the specially built telescope on Maui that made the find.

The asteroid is about 150 feet (46 meters) wide, and would probably break up in Earth?s atmosphere if it entered it, researchers said. But the result would be a blast wave that could devastate hundreds of square miles of the Earth's surface, they added.

Astronomers discovered the asteroid Sept. 16, while it was about 20 million miles (32.1 million km) away, using the University of Hawaii's Pan-Starrs PS1 telescope atop the Haleakala volcano. They dubbed ST3 a "potentially hazardous object" because of its relatively close impending pass of Earth.

??Although this particular object won?t hit Earth in the immediate future, its discovery shows that Pan-Starrs is now the most sensitive system dedicated to discovering potentially dangerous asteroids,? Jedicke said in a statement. ?This object was discovered when it was too far away to be detected by other asteroid surveys."

The Pan-Starrs PS1 telescope was designed specifically to hunt for potentially threatening asteroids. It has a main mirror 60 inches (1.8 meters) wide and a powerful digital imaging system that includes a 1,400-megapixel camera, with the 1.4 billion pixels spread across 40 centimeters.

The PS1 telescope ("PanStarrs" is short for Panoramic Survey Telescope and Rapid Response System) began searching for asteroids in mid-May. The telescope takes more than 500 photos of the sky every night and sends 4 terabytes of data, the equivalent of 1,000 DVDs, to the Maui High Performance Computing Center for analysis.

The telescope, a smaller version of a planned PS4 telescope, is expected to find about 100,000 asteroids over the next three years, as well as observe 5 billion stars and 500 million galaxies. It is also designed to study supernovas and other astronomical targets.

About 85 percent of the largest asteroids that fly near Earth have been discovered, according to the most recent report on asteroids from the National Academy of Sciences, issued in late 2009. About 15 percent of asteroids about 460 feet (140 meters) wide ? which could cause widespread local devastation if they hit Earth ? have been identified and tracked, the report added.

Asteroids less than 1 mile across crash into Earth once every few thousand years, it is estimated, and cause substantial devastation at their impact sites, PanStarrs researchers said.

NASA routinely tracks asteroids and comets that fly near Earth, using a network of ground and space telescopes as part of its Near-Earth Object Observations program. The National Academy of Sciences report found that more funding is needed for the space agency to meet its goals of compiling an asteroid-threat census.

Earlier this year, Obama also gave NASA a new goal to send astronauts to an asteroid by 2025. Such a mission could be used to gather data that helps astronomers find better methods of deflecting asteroids before they threaten Earth.

Astronomer Timothy Spahr, director of the Minor Planet Center in Cambridge, Mass., lauded the discovery of asteroid 2010 ST3 and the capabilities of the PanStarrs PS1.

"It is proof that the PS1 telescope, with its Gigapixel Camera and its sophisticated computerized system for detecting moving objects, is capable of finding potentially dangerous objects that no one else has found,? Spahr said.