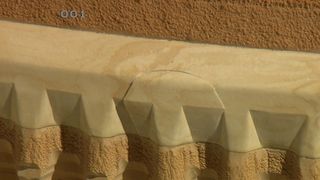 In this image, the roughly 20-inch-long crack in the space shuttle Discovery's external tank foam can be seen. Shuttle technicians are set to begin dissecting the cracked section in order to determine the cause and necessary repairs.
(Image: © NASA TV)

NASA engineers have discovered a third small crack in the aluminum skin of the huge external fuel tank for space shuttle Discovery while tackling repair work ahead of the spacecraft's final spaceflight.

Those previously known cracks are in a so-called metal "stringer" – or ring around an upper section of the tank, and beneath a layer of damaged foam insulation. The latest crack, discovered today, is on the metal skin on an adjacent section of the fuel tank. [GRAPHIC: NASA's Space Shuttle – From Top to Bottom]

"The thinking is, when the original stringer cracked because of stress and pressure loads, it then transferred, and the adjacent stringer on the left hand side got a small crack in it," NASA spokesman Allard Beutel told SPACE.com.

Discovery's next flight is its last mission before the spacecraft is retired along with the rest of NASA's shuttle fleet. The mission has been delayed since Nov. 1 due to technical glitches, weather, a potentially hydrogen gas leak, and the foam and metal cracks in the fuel tank. The gas leak and cracks were discovered during a Nov. 5 launch attempt.

The shuttle's fuel tank "stringers" are aluminum strips that provide structural integrity to a part of the fuel tank known as the intertank – the partition between the liquid oxygen and liquid hydrogen tanks.

Beutel described the new crack as being about 3 inches (7.6 cm) long on the left-hand side of the original cracked section.

Shuttle technicians will analyze data over the weekend to determine the best possible repair method that can be performed with Discovery remaining at the launch pad.

"They're going to analyze the new data and expand their look for additional cracks," Beutel said. "They want to better understand how much stress that area can take, and how the cracks happen in the first place."

Shuttle technicians have repaired similar cracks on external tanks by removing the fractured aluminum and replacing it with a twice-as-thick stringer section, before replacing the foam. But these repairs have never before been executed at the launch pad.

Previously, these types of cracks were addressed during the external tank production phase at NASA's Michoud Assembly Facility in New Orleans, where space shuttle fuel tanks are built.

Today, engineers also began replacing a component called the ground umbilical carrier plate (GUCP) on Discovery's external tank that serves as an attachment point between the tank and a 17-inch (43-cm) pipe that carries gaseous hydrogen safely away from the shuttle.

A misaligned seal within the GUCP was to blame for a hydrogen gas leak that stalled Discovery's latest launch attempt on Nov. 5.

NASA technicians will continue to analyze data and monitor measurements from the GUCP over the weekend to ensure a proper alignment of the seal. Teams hope to proceed with the GUCP installation and repair next week.

NASA is hoping to complete the work and try once again to launch what will be space shuttle Discovery's final flight on Nov. 30.

The space agency is retiring its three-shuttle fleet next year and Discovery's upcoming delivery trip to the International Space Station will be its final trip into orbit.