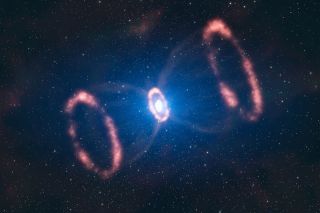 This artist’s concept show the material around a recently exploded star, known as Supernova 1987A, is based on observations which have revealed a three dimensional view of the distribution of the expelled material. The original blast was not only powerful, it was also more concentrated in one particular direction. This image shows the different elements present in SN 1987A: two outer rings, one inner ring and the deformed, innermost expelled material.
(Image: © ESO/ L. Calçada)

Amysterious bias in the way the building blocks of proteins twistcould be due to supernovas, researchers now suggest.

Ifcorrect, this could be evidence that the moleculesof life weren't created on Earth, but came from elsewhere inthe cosmos.

Organicmolecules are often chiral, meaning they come in twoversions that are mirror images of each other, much as right and lefthandsappear identical but possess reversed features.

Curiously,on Earth, the aminoacids that form the proteins for life are virtually all"left-handed," even though it should be as easy to make one versionas the other. Even more strangely, samples of certain amino acidsobtained fromthe Murchison meteorite were mostly left-handed also, suggesting therecould bea bias for left-handedamino acids throughout the rest of the cosmos.

Nowresearchers suggest that supernovas might be the culpritsbehind this mysterious effect. The key lies in the nitrogen atomscommon to allamino acids, explained researcher Richard Boyd, a nuclearastrophysicist atLawrence Livermore National Laboratory, and his colleagues.

Asstars collapse right before they become supernovas, theygenerate an intense burst of electron antineutrinos that theresearcherssuggest would preferentially interact with nitrogen atoms inright-handed aminoacids. All atoms possess "spin," and the handedness of an amino acidcan influence how the spin of the nitrogen atoms within them align.

Theantineutrinos, possessing a spin of their own, would prefer tointeract with the way nitrogen atoms spin in right-handed amino acidsratherthan left-handed ones, since the spins of the antineutrinos andnitrogen atomswould align.

Asa result, the antineutrinos would preferentially convert thenitrogen atoms in right-handed amino acids into carbon atoms. Boyd and hiscolleagues suggest this would result in the destruction of right-handedaminoacids, leaving only the left-handed versions behind.

Itmight be possible to run experiments using intense neutrinosources, such as the Spallation Neutron Source at Oak Ridge NationalLaboratory, to test whether this effect actually occurs, Boyd added.

Supernovaealso would generate electron neutrinos possessingopposite spin. This would have an effect on nitrogen atoms inleft-handed aminoacids, converting them into oxygen atoms. However, because thisreactionrequires more than four times more energy, it would occur to a muchsmallerdegree than the antineutrinos'-right-handed amino acid reactions.

Asupernova only would destroy a very small portion of theright-handed amino acids in the neighboring molecular clouds. However,as theremaining left-handed molecules mixed throughout the galaxy, thesemoleculescould be used in the formation of new amino acids. An initial imbalanceofleft-handed molecules as small as one part in 1 million or even lesscaused bysupernovas could eventually lead to a dominance of left handed aminoacidsthroughout space.

Itis "the conspiracy of the very large, supernovae, with thevery small, neutrinos, to impact something that exists on the humanscale," Boyd said.

Thereremain a number of questions concerning this idea that Boydand his colleagues are still investigating. For instance, after starsexplode as supernovas, the remnants can form neutron stars.The powerfulmagnetic fields of these neutron stars could affect the molecularstructures ofthe amino acids or their precursors, which in turn might have an impactonwhich handedness dominates.

Ifthis idea proves true, the fact that virtually all the aminoacids used by life on Earth are left-handed might suggest that themolecules oflife were not created on this planet. Instead, they might have beenborn in ourgalaxy's molecular clouds and subsequently delivered via meteorites orincludedin the mixture that formed the Earth when the planets were created.

"Ifind it really mind-boggling that the same constraints thatexist on our chemicals of life might also exist for every other entityin theuniverse," Boyd said. "If other entities are out there, theconstraints on their chemistry appear to be sufficiently similar toours thatwe may have lots of things in common with them."