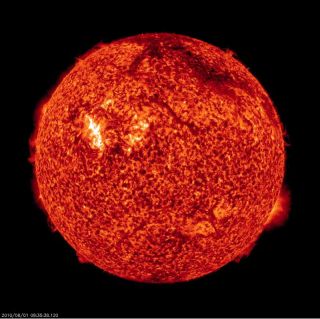 NASA's Solar Dynamics Observatory snapped this X-ray photo of the Sun early in the morning of Sunday, August 1st. The dark arc near the top right edge of the image is a filament of plasma blasting off the surface - part of the coronal mass ejection. The bright region is an unassociated solar flare. When particles from the eruption reach Earth on the evening of August 3rd/4th, they may trigger a brilliant auroral display known as the Northern Lights.
(Image: © NASA)

Skywatchersat high latitudes could be in for a spectacular treat of northern lights, theaurora borealis, Tuesday and Wednesday: After a relatively quiet stretch, itappears the sun is ramping up its activity.

Thesun's surface erupted early Sunday, blasting ?tons of plasma (ionizedatoms) into space. These atoms are headed toward Earth and could create astunning light show in the process.

"Thiseruption is directed right at us and is expected to get here early in the dayon Aug. 4th," said Leon Golub of the Harvard-Smithsonian Center forAstrophysics. "It's the first major Earth-directed eruption in quite sometime."

Thesolar eruption, called a coronal mass ejection, was spotted by NASA's Solar Dynamics Observatory , which captures high-definition views of the sun ata variety of wavelengths. SDO was launched in February and peers deep into thelayers of the sun, investigating the mysteries of its inner workings.

Viewsof aurorae are usually associated with Canada and Alaska, but even skywatchersin the northern U.S. mainland are being told they can look toward the northTuesday and Wednesday evenings for rippling "curtains" of green andred light.

Whena coronal mass ejection reaches Earth, solar particles stream down ourplanet's magnetic field lines toward the poles. In the process, the particlescollide with atoms of nitrogen and oxygen in the Earth's atmosphere, which thenglow, creating an effect similar to miniature neon signs.

Theinteraction of the solar particles with our planet's magnetic field has thepotential to create geomagnetic storms, or disturbances in Earth's magnetosphere. And while aurorae arenormally visible only at high latitudes, they can light up the sky even atlower latitudes during a geomagnetic storm.

Thesun's activityusually ebbs and flows on a fairly predictable cycle. Typically, a cycle lastsabout 11 years, taking roughly 5.5 years to move from a solar minimum, a periodof time when there are few sunspots, to peak at the solar maximum, during whichsunspot activity is amplified.

Thelast solar maximum occurred in 2001. The latest minimum was particularly weakand long- lasting. The most recent solar eruption is one of the first signsthat the sun is waking up and heading toward another maximum.