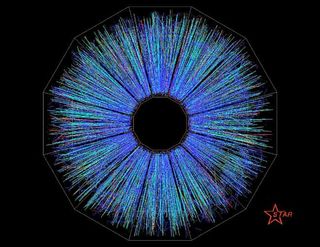 Two gold nuclei collide in the center of this image, perhaps creating a new state of matter called the quark-gluon plasma. The lines spreading out from the center are the paths of the resulting shrapnel, as recorded by the STAR detector at the Relativistic Heavy Ion Collider.
(Image: © Brookhaven National Laboratory)

What do you get when youturn the temperature up to a trillion degrees?

Quite a heating bill.

Actually physicists claimthat at this temperature nuclear material melts into an exotic form of mattercalled a quark-gluon plasma - thought to have been the state of the universe amicrosecond after the Big Bang.

Recreating this primordialsoup is the primary purpose of the Relativistic Heavy-Ion Collider (RHIC) atBrookhaven National Laboratory. After five years of data, it appears as if RHICmay have succeeded.

But a big mystery loomsover the detection: the putative plasma explodes more violently than predicted.

"We expected to bringthe nuclear liquid to a boil and produce a steam of quark-gluon plasma,"said John Cramer from the University of Washington. "Instead, the boilerseems to be blowing up in our faces."

The explosive result, whichgoes by the name of the HBT puzzle, may call into question what RHIC is makingin its high-speed collisions, or it might mean the theory needs retuning.

Cramer and his colleagueshave another alternative explanation, too: perhaps the explosion is not asexplosive as the data suggests. The scientists use 50-year old physics toreinterpret the measurements at RHIC.

"We have taken aquantum mechanics technique, called the nuclear optical model, from an old anddusty shelf and applied it to puzzling new physics results," said GeraldMiller, a coauthor also at the University of Washington. "It's really ascientific detective story."

The main suspect in thisdetective story is the quark-gluon plasma. But how do you know when you've seenit? The plasma cannot be observed directly - it disappears in less than ahundredth of a billionth of a trillionth of a second. All that researchers canhope to do is detect the particles that fly out when the plasma freezes backinto normal matter.

"You can't go in thereand directly measure the quarks and gluons," Miller told SPACE.com."You have to work back from what you measure to what you believe wasthere."

Scott Platt from MichiganState University, who didn't participate in the new research, comparesdetecting the quark-gluon plasma to what astronomers have to do when studyingan exploding star.

"They only see thelight coming from the star's surface and then try to infer what happenedinside. We [physicists] have the same problem," he said.

Instead of light, RHIC researcherssee thousands of particles - mostly pions, which are tiny things weighing aboutone-seventh as much as a proton, itself subatomic. The pions show up indetectors set up around collision points, where gold nuclei traveling at 99.995percent of the speed of light hit each other head-on.

To see a movie of agold-on-gold collision click here (note that the gold nuclei looklike pancakes because they are traveling so fast).

"We can't stick abarometer or thermometer into the collision center," Platt explained, butby a careful reconstruction of the flight paths of all the debris coming out,scientists can extract information about the brief, but intense, furnace createdwhen gold nuclei smash into each other.

From the RHIC data,research teams have identified three smoking guns for the quark-gluon plasma:

Although this evidenceappears solid, physicists are hesitant to say they have created the meltednuclear goop. "That debate is going on as we speak," Platt said.

One of the reasons for thisconservative approach has to do with how fast the supposed plasma appears tofreeze back into ordinary matter. Theory assumed this phase transition wouldtake almost twice as long as was measured.

"In science, if youhave a bunch of things that are right, it won't matter if one thing goeswrong," Miller said.

The apparent explosion ofpions and other particles coming from the phase transition is the so-called HBTpuzzle.

"It is the one RHICobservation that deserves the word puzzle or surprise," Platt said.

Instead of comparing radiowaves, physicists compare two pions flying out from the collision center. Butthese measurements require a lot of modeling and approximations, Plattexplained.

Cramer and Miller and theircollaborators have redone the calculations, incorporating something called thenuclear optical model. This dates back to 1950's, when scientists werebeginning to understand the strong interactions inside the nucleus.

Effectively, thisold-school physics accounts for the fact that, as pions form out of the coolingplasma, they will have to climb their way out of an attractive field - similarto the gravitational field that a rocket has to overcome to escape a planet'sclutches.

"This is notsurprising, since it has already been shown that the medium is verydense," Miller said. "It is as if the pions are trying to leave acrowded room."

According to Cramer, thiscrowded room "distorts" the data, making the transition look moreexplosive than it really is. In a sense, the HBT puzzle could be a simplemisinterpretation of what the data shows.

Platt is unsure that Cramerand Miller's work, published this month in Physical Review Letters,indeed clears up the HBT puzzle entirely.

"They pointed out oneof the ways that the calculations can be improved," he said. "But theanalysis is ongoing."

If the puzzle does end upbeing solved, will physicists be ready to claim victory?

"It is not for me tosay that we have found the quark-gluon plasma," Cramer said. "But wehave made an important step."