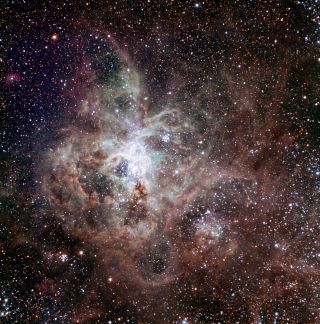 This first light image of the TRAPPIST national telescope at La Silla shows the Tarantula Nebula, located in the Large Magellanic Cloud (LMC) — one of the galaxies closest to us. Also known as 30 Doradus or NGC 2070, the nebula owes its name to the arrangement of bright patches that somewhat resembles the legs of a tarantula. Full Story.
(Image: © TRAPPIST/E. Jehin/ESO)

A new robotic telescope built to hunt for alien planets and comets from Chile has opened its camera eyes and taken its first photos of the night sky.

The first cosmic photos from the telescope, known asTRAPPIST, included stunning views of the Tarantula Nebula and spiral galaxyM83, but astronomers hope to use the advanced observatory to find two moreelusive targets ? alienplanets and comets that orbit the sun. The new photos werereleased this week.

?Thetwo themes of the TRAPPIST project are important parts of an emerginginterdisciplinary field of research ? astrobiology ? that aims at studying theorigin and distribution of life in the Universe,? said astronomerMicha?l Gillon, who is in charge of the telescope's exoplanet studies for theEuropean Southern Observatory, which is operating the new instrument.

TRAPPIST,short for TRAnsiting Planets and PlanetesImals Small Telescope, is located atESO's La Silla Observatory in Chile's high Atacama desert. It will hunt for extrasolar planets by tracking thetelltale dips in brightness of stars as planets pass in front of them as seenfrom Earth and block their light.

?Terrestrialplanets similar to our Earth are obvious targets for the search for lifeoutside the Solar System, while comets are suspected to have played animportant role in the appearance and development of life on our planet,? said astronomerEmmanu?l Jehin, who leads the telescope's comet-hunting mission.

The TRAPPISTtelescope is also equipped with special filters that are optimized to trackcomets in the southern sky. Researchers plan to use the telescope to makeregular comet observations to track the icywanderers as they orbit the sun, as well as determine what types of materialthey eject during their cosmic travels.