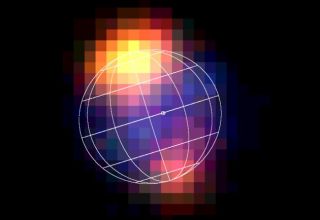 Space weather forecasters have it even tougher than regular weather forecasters. In trying to predict long-range solar activity, they have to rely on a picture of just the half of the Sun they can see. Storms brewing on the backside are hidden from view until they rotate to the front.

Jupiter to the rescue. The giant gas planet reflects solar activity, scientists have learned. And when Jupiter is on the other side of the solar system, it can act as a mirror for flare-ups from the back side of the Sun.

Scientists had previously measured X-rays emanating from the Jovian atmosphere. Those coming from the equator were theorized to be related to solar activity. X-rays also come from Venus, Mars, Saturn and even the Moon.

The work, announced Monday, is detailed in the journal Geophysical Research Letters.

Jupiter is not a perfect mirror. Just one out of every few thousand X-ray photons gets reflected. But the connection should help astronomers who study the Sun and those who monitor its outbursts, the research team concludes.

Solar radiation flares and clouds of charged particles often associated with them can damage satellites and are dangerous to astronauts. Residents of the International Space Station retreat to a heavily shielded region of the orbiting craft during intense solar storms.

Scientists have warned that if humans are ever to travel to Mars, space weather detectors will have to be set up around the solar system.

Sun storms typically erupt from active regions -- sunspots that harbor pent-up magnetic energy. It's impossible for space weather forecasters to know of potential storminess when sunspots are out of view. Spots can grow (or shrink) dramatically as the endure for weeks while circling with the Sun's rotation.

"As Jupiter orbits the Sun, we hope to be able to learn more about the active areas of the Sun we can't see from Earth by watching the Jovian x-ray emissions," said Graziella Branduardi-Raymont from the University College London. "If a large solar flare occurs on an area of the Sun that is facing Jupiter, we may be able to observe it in light scattered from Jupiter, even if we cannot see that region of the Sun from around the Earth at the time."

The study was funded by the Particle Physics and Astronomy Research Council (PPARC).