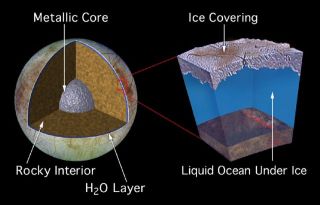 A model of Europa's interior, including a global ocean. If a 100 kilometer-deep ocean existed below Europa's ice shell, it would be 10 times deeper than any ocean on Earth and would contain twice as much water as Earth's oceans and rivers combined.
(Image: © NASA/JPL)

There may be enough oxygen in the waters of Jupiter's moon Europato support millions of tons worth of fish, according to a new study. And whilenobody is suggesting there might actually be fish on Europa, this findingsuggests the Jovian satellite could be capable of supporting the kinds of lifefamiliar to us here on Earth, if only in microbial form.

Europa, which is roughly the size of Earth's moon, is enveloped bya global ocean about 100 miles deep (160 km), with an icy crust that may beonly a few miles thick. From what we know of Earth, where there is water, thereis a chance at life, so for many years scientists have speculated that thisJovian moon could support extraterrestrials.

As we learned more about Jupiter?s effect on its moons, thepossibility for life on Europagrew even more likely. Studies showed the moon could have enough oxygen tosupport the kind of life we are most familiar with on Earth.

The ice on the surface, like all water, is made from hydrogen andoxygen, and the constant stream of radiation pouring in from Jupiter reactswith this ice to form free oxygen and other oxidants such as hydrogen peroxide.The reactivity of oxygen is key to generating the energy that helped multi-cellularlife flourish on our planet.

Still, researchers had thought there was no effective method fordelivering any of this oxygen-rich matter into Europa's ocean. Scientists hadassumed the primary way for surface materials to migrate downward was from theimpacts it would suffer from cosmic debris, which regularly bombards everythingin our solar system. ?[Photosof Jupiter's moons.]

However, past calculations suggested that even after a few billionyears, such "impact gardening" would never lead to an oxygenatedlayer more than some 33 feet (10 meters) deep into the ice shell, nowhere farenough down to reach the underlying ocean.

However, the new study suggests this oxygen-rich layer could befar thicker than before thought, potentially encompassing the entire crust. Thekey is looking at other ways to stir Europa's crust, explained researcherRichard Greenberg, a planetary scientist at the University of Arizona's Lunar andPlanetary Laboratory at Tucson.

The gravitational pull Europa experiences from Jupiterleads to tidal forces roughly 1,000 times stronger than what Earth feels fromour moon, flexing and heating Europa and making it very active geologically.This could explain why its surface appears no older than 50 million years old ?its surface underwent complete turnover in that time.

A major resurfacing process on Europa seems to be the formation ofdouble ridges, which cover at least half of its surface. Tidal forces may becausing fresh ice from below ? probably newly frozen ocean water ? to pushupward and over the surface, where it would slowly get oxygenated.

As ridges pile on top of ridges, older material gets buried,shoving this oxygen-rich matter downward. After one or two billion years, thisprocess alone could spread oxidants throughout the entire crust, thus reachingthe ocean, Greenberg calculated.

Other mechanisms could help stir Europa'scrust also. Parts of the surface could partially melt from below, leadingrafts of ice to break loose and tumble around before they froze back in place.

Roughly 40 percent of Europa's crust appears to be covered withthe ensuing "chaotic terrain." Also, as matter comes up from belowand widens cracks, the nearby surface crumples, burying some material. Theseextra processes could help push some oxidants downward, but it would still takeat least two billion years or so before radiation loaded the entire crust withoxygen.

As ice on the base of this oxygenated crust melts, even with themost conservative assumptions, after only a half-million years oxidant levelsin the ocean would reach the minimum oxygen concentration seen in Earth'soceans, which on Earth is enough to support small crustaceans, Greenberg found.

In only 12 million years, oxidant concentrations would reach thesame saturation levels of Earth's oceans, enough to support our largest sealife.? Given the cold temperatures and high pressures likely seen in Europa'socean, it could actually take in more oxygen than Earth's oceans could beforeits water reached its saturation point.

"I was surprised at how much oxygen could get downthere," Greenberg said.

One concern about all this oxygen was that it might actually domore harm than good. The extraordinary reactivity of oxygen could in principledisrupt the chemical processes that are thought to lead to the origin of lifeand that may have been an aspect of early life.

On Earth, life had more than a billion years to evolve, beforeoxygen became plentiful in the atmosphere, and that delay gave organisms plentyof time to develop genetic mechanisms and physical structures that allowed themto use oxygen, instead of being destroyed by it.

The delay of 1 to 2 billion years before oxygen in Europa's crustmade its way into its ocean is roughly the same amount of time it took life onEarth to develop before oxygen became a problem, so life might have enough of arespite to develop on the Jovian moon. Assuming life on Europa respired atrates similar to fish on Earth, the continuous rate of oxygen delivery there couldsustain roughly 3 million metric tons of life, Greenberg said.

One might not have to wait for a probe to land on Europa to detectany oxygen there. "Spectroscopy done by telescopes on Earth or in orbitcan tell what substances are mixed into the ice," Greenberg said.

Greenberg detailed his findings May 6 in the journal Astrobiology.