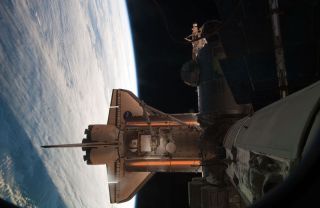 Space shuttle Atlantis is featured in this image photographed by an Expedition 23 crew member shortly after Atlantis docked with the International Space Station. The Russian-built Mini-Research Module 1 (MRM-1), named Rassvet, is visible in the cargo bay. Earth's horizon and the blackness of space provide the backdrop for the scene on May 16, 2010.
(Image: © NASA)

Spaceshuttle Atlantis will undock from the International Space Station (ISS) onSunday, beginning its return to Earth for what NASA expects to be its finallanding.

Atlantispilot Dominic ?Tony? Antonelli, assisted by commander Ken Ham and their fourSTS-132 crewmates, are scheduled to undock the space shuttlefrom the International Space Station (ISS) at 11:22 a.m. EDT (1522 GMT), acouple of hours after closing the hatches between the two vehicles.

Theastronauts completed the last of their major mission objectives on Saturdaywith the return of a cargo pallet to Atlantis? payload bay. Earlier, they delivered a new Russianresearch module and replaced six batteries for one of the station?s foursolar array wings during the seven days they were docked with the ISS.

?We?vegot the integrated cargo carrier back in the payload bay, we got three verysuccessful spacewalks under our belt, and the Rassvet module installed on theInternational Space Station and so now the mission shifts to returning Atlantishome, hopefully mid-next week,? said lead shuttle flight director Mike Sarafinon Saturday.

Weatherpermitting, the crew will land Atlantisat the Kennedy Space Center in Florida on Wednesday.

Earlyon Sunday morning, the astronauts planned to complete the final transfer ofequipment and experiment results from the station to the shuttle in preparationfor their departure.

?They?lltransfer the suits that they used to perform theirspacewalks back into Atlantis and we?ll perform a final verification tomake sure all the science and transfer items are back across the hatch andready for return,? said Sarafin.

The sixshuttle crew members and their six station counterparts also took part in anews conference with U.S. and Japanese media before bidding each otherfarewell, closing the hatches and then undocking their spacecraft. Onceseparated by a distance of about 400 to 600 feet, Atlantis will perform a360-degree flyaround of the ISS while the crew photographs the orbitinglaboratory.

?Weshould get some outstanding views of the International Space Station forengineering data as well as a good view of the Rassvet module that was mostrecently installed,? Sarafin explained.

Beforelanding, the STS-132 astronauts will take a few days to prepare the shuttle forreentry. They will perform a routine inspection of their heat shield to ensureno damage was sustained by micrometeroid impacts while docked to the stationand then test the control surfaces and thrusters that will guide the orbiterback into and through the atmosphere.

NASAplans to retire its space shuttle fleet after just two more missions to beflown by Discovery and Endeavour in September and November, respectively.

Atlantiswill be prepared to fly as an emergency rescue vehicle for the final spaceshuttle mission but otherwise is slated to be the first orbiter to retire after32 missions. Atlantislaunched on it current mission on May 14.

?I verymuch look forward to seeing Atlantis come home,? said Sarafin. ?I had a talkwith [Atlantis?] flow director Angie Brewer prior to the launch of Atlantis andI promised I?d give her back in the same condition that we got her and we?vecome very close to that. I look forward to greeting her and her team out at theKennedy Space Center and fulfilling that promise.?