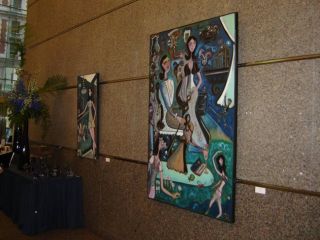 A collection of work by artist Laurance Rassin's is being showcased in a solo exhibit called "Simply Blue" in the lobby of the Conde Nast building in New York City through June 4th. The exhibit calls attention to Rassin's goal of becoming the first American artist in space.
(Image: © Denise Chow)

NEW YORK? As the age of commercial spaceflight gains speed, aNew York expressionist is hoping to become the first American artist in spaceby staking his claim for a seat on a suborbital passenger spaceship built by VirginGalactic. ?

Artist Laurance Rassin, the artistic director of a 21stcentury expressionist art movement called The New Blue Riders, is showcasing hiswork in a solo exhibit called "Simply Blue," on display through June4 in the lobby of the Conde Nast building in New York City's Times Square.

The exhibit, which includes paintings, bronzes and pieces offurniture, focuses on Rassin's quest to become the first American artist in space.Canadian circus performer Guy Laliberte, billionaire founder of the Cirque duSoleil, brought performanceart to space during his 2009 orbital flight to the International SpaceStation.

"I grew up outside of Greenbelt, Md., looking at NASAphotos my whole life," Rassin told SPACE.com in a telephone interview."I find space fascinating. As a small boy, I wanted to go to space. Thisopportunity for the common man, the everyday person to be able to go to space ?it's an awakening of the social consciousness for what is possible in the future."

Rassin is training for a flight on the eight-personsuborbital SpaceShipTwospaceliners being built for Virgin Galactic, a commercial spaceflight companyfounded by British billionaire Sir Richard Branson. The first SpaceShipTwo ?the VSS Enterprise ? and its WhiteKnightTwo mothership Eve are undergoingflight tests at California's Mojave Air and Space Port.

Proceeds from the "Simply Blue" art exhibit willbe split to support Rassin's flight aboard Virgin Galactic, with a significantportion also donated to the Chabad's Children of Chernobyl, a non-profitorganization whose mission is to evacuate children from the Chernobyl region ofUkraine.

In order to realize his dream, Rassin will take part in atwo-day training program at the National AeroSpace Training and Research (NASTAR)Center in Southampton, Penn., in September. The rigorous training will prepareRassin for the extreme conditions he would face on a suborbital flight.

"It's a pretty intense course," Brienna Henwood,Director of Space and Research Programs at the NASTAR Center, told SPACE.com."We bring you through the entire flight profile and physically expose youto G-force. We use NASA astronaut training techniques to teach you how tobreathe and train your muscles."

Over the course of the two days, participants are taughttechniques to manage the physiological and psychological stresses of suborbitalspace travel. This includes learning how to cope with the amount of pressure onthe body at various points in the flight. For example, for a couple secondsduring re-entry, the force exerted on a passenger makes it feel like anelephant is sitting on his or her chest, Henwood said.

The NASTAR Center, which is currently the only FederalAviation Administration safety-approved training facility, prepares passengersfor Virgin Galactic's specific flight profile, which takes clients up 50,000feet (15,240 meters) before releasing them in the SpaceShipTwo suborbital craft.SpaceShipTwo then ignites its rocket boosters and the vehicle jets toward spacebefore descending back to about 70,000 feet (21,336 meters), Henwood explained.

The total flight time is about 2.5 hours, during whichpassengers experience approximately four minutes of weightlessness. The cost ofthe two-day training program is $6,000, and currently, seats on VirginGalactic's SpaceShipTwo are commanding $200,000 each. ?

But for Rassin, the experience is more symbolic.

"Laurance wants to do art in space. He's an artist andthis is his passion," Henwood said. "He wants to create some originalartwork in this microgravity environment. The commercial industry is opening upthe doors so that anybody can have the chance to go to space."

Henwood predicts that by next year commercial flights tospace will be taking off with increasing regularity, and if that is the caseRassin has some lofty goals for the future.

The original Blue Rider group originated as an expressionistart movement in Germany from 1911 to 1914. The resurrected New Blue Ridermovement, of which Rassin is the artistic director, counts several descendentsof the original group among its members. Rassin hopes to honor the originalBlue Riders in a futuristic art show that incorporates space travel.

"We could orbit paintings in space, videotape it, andbring it back here to tour as a show on Earth," Rassin said.

For Rassin, part of the artistry of the spaceflight experiencelies in the simplicity of the commercial industry's impact on the future ofspace travel.

"I'm not a CEO of some big company, or some big-timeTexas oil guy," Rassin said. "I'm just an average guy scratching mypaintings on the cave wall, trying to be a great American artist."