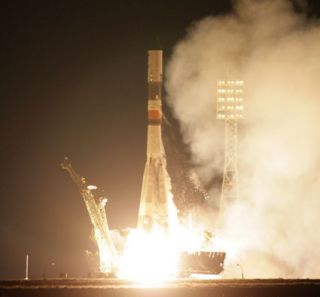 The unmanned Russian Progress 37 cargo craft atop its Soyuz rocket launches from the Baikonur Cosmodrome in Kazakhstan on April 28, 2010 to deliver new supplies to the International Space Station. Full Story.
(Image: © NASA/Mark Bowman)

A new unmanned cargo ship loaded with tons of supplies successfully docked at the International Space StationSaturday despite a last-minute failure that forced a Russian cosmonaut to takecontrol and guide the robotic freighter in manually.

Russian space station commander Oleg Kotov took manualcontrol of the automated cargo ship, called Progress37, while it hovered about 3,280 feet (1,000 meters) away from theorbiting lab with 2.6 tons (2,359 kg) ?of supplies onboard.

Kotov, a colonel in the Russian Air Force, used a remote controlstation set up inside the station to guide the 24-foot (7.4-foot) longspacecraft into a Russian docking port on the Earth-facing side of the orbitinglaboratory. With deft hands, Kotov flew the Progress 37 in to a 2:30 p.m. EDT(1830 GMT) docking as the space station flew 220 miles (354 km) over southernRussia.

"I found the station and I?m going to bring it into thecenter of the field of view," Kotov told Russian Mission Control inMoscow. Flight controllers kept close tabs on Kotov's progress. "I'm justgoing really slow and taking it very easy," the cosmonaut said.

"You brought it in from close to 1,000 meters,"Mission Control said. "That's a first time in history."

The Progress 37 cargo ship, also known as M-05M, is thelatest in a series of robotic Russian spacecraft to haul vital supplies to theInternational Space Station. The spacecraft blasted off from the Central Asianspaceport of Baikonur Cosmodrome in Kazakhstan on Wednesday.

Progress spacecraft are made up of three differentmodules and resemble Russia'sSoyuz spacecraft ? which ferry astronauts and cosmonauts to and from thestation. Both are designed to fly and dock autonomously. But instead of theSoyuz's crew capsule, Progress vehicles carry a tank of propellant to feed thespace station's rocket thrusters. ?

Progress freighters are also expendable, and areroutinely intentionally destroyed at the end of their missions. Last week, theProgress 35 spacecraft undocked from the station's Pirs docking port ? where thenew Progress 37 parked today. That older spacecraft burned up over the PacificOcean on Tuesday.

In upcoming weeks, another old unmanned cargo ship,Progress 36, is due to depart the space station. Soon after, NASA's space shuttleAtlantis is due to launch on its final spaceflight ever on May 14 to deliver anew Russian science module to the space station.

It will be one of NASA's three finalshuttle missions before the three-orbiter fleet retires in November.

Candy, books and movies are just some of those goodies,according to Russian news reports.