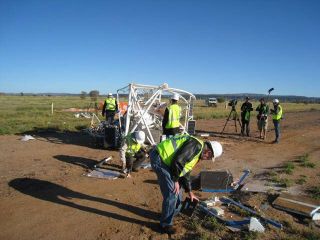 Ahuge NASA balloon loaded with a telescope painstakingly built to scan the skyat wavelengths invisible to the human eye crashed in the Australian outbackThursday, destroying the $2 million astronomy experiment and just missingnearby onlookers, according to Australian media reports.

Indramatic video released by the Australian Broadcasting Corporation (ABC), thegiant 400-foot (121-meter) balloon is seen just beginning to lift its payload,then the telescope gondola appears to unexpectedly come loose from itscarriage. The telescope crashes through a fence and overturns a nearby parkedsport utility vehicle before finally stopping.

"Noone was injured. A mishap investigation board is being convened," NASAofficials said in a statement released late Thursday.

Theattempted balloontelescope launch took place at the Alice Springs Balloon Launching Centre,near the town of Alice Springs, in the northern territory of Australia.

Thewayward balloon overturned one car, but missed another parked nearby with localAlice Springs couple Stan and Betty Davies, who had come to watch the launch,still inside.

"Wewere sitting in our car and preparing to move it out of the way and we wereactually about a foot of being wiped out," ABC quoted Davies as saying.

Theballoon was carrying the Nuclear Compton Telescope (NCT), a gamma-ray telescopebuilt by astronomer Steven Boggs and his colleagues at the University ofCalifornia, Berkeley, California to study astrophysical sources in space. Thetelescope was dragged about 450 feet (137 meters) before finally coming to astop, NASA officials said.

"Todaywas a terrible day for a lot of people," wrote Eric Bellm, a graduateastronomy student at the UC Berkeley, in a blog chronicling the sciencemission. "For the NCT team, we?ve poured our hearts into this instrumentfor years.  It was an almost unfathomable shock to find ourselves cleaningup the wreckage of our gondola rather than watching it lift off towardsspace."

Theunmanned research balloon was built by NASA's Columbia Scientific BalloonFacility in Palestine, Texas and expected to haul its two-telescope payload upto an altitude of about 120,000 feet (36,576 meters). That's about 23 miles (37km), though smaller home-builtballoons have been built to reach high altitudes as well.

Inhis account of the crash, Bellm said an investigation into the balloon'slaunch failure will be performed, though a first glance found that at leastsome of the components for the Nuclear Compton Telescope appear to havesurvived relatively intact. The science team has cleaned up the wreckage andreturned it to a staging hangar, he added.

RaviSood,director of the Alice Springs Balloon Launching Centre and a professor atAustralia's University of New South Wales, confirmed that no one was hurt inthe incident, but added that sometimes balloon launches can go awry.

"Ballooning,that's the way it happens on occasions but it is very, very disappointing.Gut-wrenching actually," he told ABC.

Thatlaunch, which sent the telescope and its balloon to an altitude of 127,000 feet(38,709 meters), went according to plan, the space agency said.

Theballoon's next payload to fly, an X-raytelescope called HERO aimed at mapping the galactic center for NASA'sMarshall Space Flight Center, was targeted for May, Australian officials added.