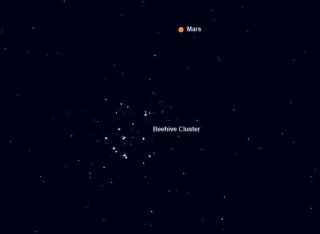 SKY MAP: See how to spot Mars as it flies by the Beehive star cluster in the Cancer (Crab) constellation on April 16, 2010.
(Image: © Starry Night Software)

Skywatchers have a chance in mid-April to watch Mars pass acosmic beehive in the sky. All that is required are clear skies and the righttools — some binoculars or a small, low power telescope — to see the Mars show asdarkness falls.

Currently, Mars can be found high up in the southern sky atdusk and sets between midnight and dawn.

On the evening of Friday, April 16, the red planet (whichactually shines with a yellow-orange hue) will be positioned within the dimconstellation of Cancer, the Crab.

One of my astronomy mentors, the late Kenneth Franklin ofNew York's Hayden Planetarium, used to refer to Cancer as "the emptyspace" in the sky. Indeed, it's the least conspicuous of the 12 zodiacalconstellations and quite frankly, aside from being in the Zodiac, it's probablynoteworthy only because it contains one of the brighteststar clusters in the sky.

It is Praesepe, better known as the Beehive Star Cluster,which contains a myriad of small stars.

And on that particular Friday evening, Mars will be passingjust a little over a degree to the north of the middle of this star cluster,making for a very charming sight. [How to see Mars and the Beehive.]

Cancer'sbig star cluster is known formally as Messier 44. The name"Praesepe" extends back to ancient times and refers to a manger, atrough or box used to hold food for animals (as in a stable), mostly used inraising livestock.

Interestingly, Praesepe was also used in medieval times as aweather forecaster. It was one of the very few clusters that were mentioned inantiquity. Aratus (around 260 BC) and Hipparchus (about 130 BC) called it the"Little Mist" or "Little Cloud."

But Aratus also noted that on those occasions when the skywas seemingly clear, but the "Little Mist" was invisible, that thismeant that a storm was approaching.

Of course, we know today that prior to the arrival of anyunsettled weather maker, high, thin cirrus clouds (composed of ice crystals)begin to appear in the sky. Such clouds are thin enough to only slightly dimthe Sun, moon and brighter stars, but apparently just opaque enough to hide adim patch of light like Praesepe. ?

Praesepe remained a mysterious patch of light until Galileodirected his crude telescope toward it in the year 1610, and saw that itwas a cluster of stars too dim to be separately visible to the unaided eye.

Binoculars show up dozens of its stars; while largetelescopes reveal about 200. The stars are spread over an area roughly threetimes the apparent diameter of the moon. It appears so large because of itsrelative closeness to us at a distance of about 580 light years away; closer tous than all but a few clusters.

As to how the cluster's more popular name,"Beehive" evolved, It might be that some anonymous person onceexclaimed, when he saw so many tiny stars revealed in an early telescope,"It looks like a swarm of bees!"

So "Beehive" is a relatively "new"title, dating back to perhaps the early 17th century.

Mars was nearest to the Earth back in late January. Evensince, we've been leaving it behind and so as Mars recedes from the Earth, itcontinues to diminish in brightness.

On the night when Mars passes closest to the star cluster,it will be 107 million miles (172 million km) from Earth and shines atmagnitude +0.5, or a trifle fainter than the nearby star Procyon in CanisMinor. It now appears only 1/5 as bright as it was at its opposition in lateJanuary.

For the very best viewof Mars and the Beehive you should use binoculars or if you're using atelescope, a wide-field, low power eyepiece. The Beehive is not anexceptionally condensed cluster; the stars are widely scattered, so if you usetoo much magnification it will spoil the effect.

The late Walter Scott Houston, who for nearly a half centurypenned the "Deep Sky Wonders" column in Sky & Telescope magazine,wrote:

"In low power fields, finders and binoculars, M44 is abrilliant show object. It has no sharp boundary. No one can say for sure wherethe cluster's faint glow merges into the sky background. The cluster appears asa ghostly sheen of cobwebs at least a degree in diameter, sometimes two."?

Of course, low power will also help to frame Mars in thesame field of view. And even though it will be nearest to the center of thecluster on Apr. 16, it will still be quite close by through the rest of thatweekend.

What to call it?

Praesepe or Beehive? The final choice is yours.

From my own personal viewpoint, I prefer to refer to thecluster by its older moniker, Praesepe, for this simple reason: Two nearbystars, Gamma and Delta in Cancer, bracket Praesepe to the north and southrespectively and have been known for some 20 centuries by their respectivenames Asellus Borealis and Asellus Australis — the Aselli or northern andsouthern ass colts — feeding from their manger (Praesepe).

Although some might commonly associate these animals asstubborn, they actually have a keen sense of self-preservation and like tothink about new things before they react, which is often misinterpreted asstubbornness.

But certainly they would have enough sense not to feed froma beehive!

Joe Rao serves as an instructor and guest lecturer at New York's Hayden Planetarium. He writes about astronomy for The New York Times and otherpublications, and he is also an on-camera meteorologist for News 12Westchester, New York.