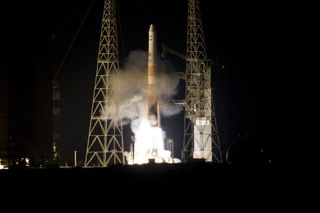 NASA launched the newest in a series of high-tech weather satellites Thursday that will help forecasters predict sunshine and showers alike.

Once it's checked out and settled into the correct orbit around Earth, GOES-P will be turned over to the National Oceanic and Atmospheric Administration (NOAA), which will use it alongside similar satellites to build extensive weather maps to predict meteorological conditions around the planet.

"This satellite is absolutely critical to accurate hurricane forecasting and warnings," Bart Hagemeyer, the meteorologist in charge of the NOAA National Weather Service forecast office in Melbourne, Fla., said before the satellite’s launch. "We really couldn’t do our job without it and I'm just glad to see we've got another GOES going up."

The nearly $500 million GOES-P was initially slated to launch Tuesday, but bad weather and technical glitches delayed the space shot. High winds and last-minute alarm (ultimately a false alarm) threatened to delay the flight even more Thursday night, but were cleared in time to make the satellite’s one-hour launch window.

GOES-P will join a long line of previous GOES satellites that were first launched in 1975 to monitor and help predict the weather. GOES-P will initially serve as a backup for the GOES-N and GOES-O satellites currently in orbit.

"It's a great day for NASA and NOAA, as this last launch completes the spacecraft in the GOES N-P series," said Andre Dress, NASA’s GOES deputy project manager at NASA's Goddard Space Flight Center in Greenbelt, Md., after the launch. "It means the hard work and dedication from this team during the past 12-plus years all has been worth it. Our review of the spacecraft and launch vehicle data shows that GOES-P is in a nominal transfer orbit with all spacecraft systems functioning properly."

The brand-new satellite will eventually take over for its older siblings once one of them fails or runs out of fuel.

"This completes the latest satellite in the GOES series to provide continuous weather monitoring for more than 50 percent of the planet," said Charlie Maloney, GOES N-P program manager at Boeing Space and Intelligence Systems in El Segundo, Calif., which built the spacecraft. "It's fully anticipated that it will last greater than 15 years."

Besides creating weather maps, GOES-P will also monitor weather on the sun to help predict how solar flares could affect Earth, and will measure ocean and land temperatures and aid in search-and-rescue operations.

"It's all about saving lives and property. That’s one of its primary goals and we don’t take that responsibility lightly," Dress said before the launch.