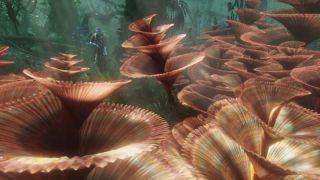 Helicoradian (also known as Loreyu, meaning "beautiful spiral") is a zooplantae (part animal, part plant) possessing a single leaf that responds to touch by coiling up and retracting to the ground. Its neuromuscular system makes it difficult for xenobiologists to classify. Helicoradia can grow to 6-8 meters (20-26 feet) in height and 2.5 meters (8.2 feet) across.
(Image: © James Cameron’s Avatar: The Game)

The film "Avatar" takes viewers toa fictional moon, where the plants glow, shoot poison leaf tips andcommunicate. None of this fits exactly with our definition of"plant," but one botanist has pieced together an ecologicalback-story for how plants may have evolved on this strange world.

The moonPandora is depicted as a lush rainforest that may remind some of Hawaii orBorneo. But the Earthlings who venture onto this exomoon are confronted with plants (not to mentionanimals) that behave in surprising ways.

"There's a balance of familiar andfanciful," says Jodie Holt, a plant physiologist from the University ofCalifornia, Riverside. "I think if the organisms had been too bizarre,viewers would have dismissed them as unreal."

The plants were designed by director JamesCameron and his graphic artists. However, during production, Holt was askedto provide some scientific justification for the imaginary world they werecreating.

"The plants are fake, but the science isreal," she says.

Besides advising the actress Sigourney Weaveron how to portray a botanist, Holt gave scientific names and descriptions to 55of the most bizarre plants in the film. This catalog is included in a companionresource called "Pandorapedia."

What's in a name

One the most captivating Pandoran flora is the "helicoradian" ? an orange,spiraled plant that folds up and disappears when touched. Plants on Earth dohave touch sensitivity, says Holt, but here it has been greatly exaggerated.

"We usually only call something a plantif we poke it and it doesn't move away," she says.

In fact, Cameron invented his own term "plananimal" (or Zooplantae) for Pandoran life forms that blur the line between plant and animal.

However, no single characteristicdistinguishes plants from other life kingdoms. We generally think ofphotosynthesis as the epitome of "plant-hood," but there areparasitic plants that don't photosynthesize their food and some non-plantbacteria that do.

Holt admits that the definition of plant hassome wiggle room for whatever plant-like organisms may exist on other planets,but she herself is a novice to the imaginingsof "exobotanists."

"If I had made up the plants, I wouldhave been too constrained by what I know," she says.

Holt didn't invent any new vegetation for thefilm, but she provided the film makers with scientific "cred."

"Whendescribing a plant's appearance and characteristics, the overriding theme isplant evolution, so I asked for everything they had on the moon's environmentthat might select for certain traits," she says.

It turned out Cameron had thought through a lotof this already. He told her what the Pandoran soil and atmosphere contained and about theweak gravity but high magnetic fields.

From this, she was able to provide plausibleexplanations for the plant life. For example, the gigantism?exhibited by the humongous"Hometrees"?is likely theresult of higher levels of atmospheric carbon dioxide and lower gravitationalpull on Pandora in comparison to Earth.

The glowing?or bioluminescence?of some plantsmight have been an adaption to long periods of darkness on Pandora, Holtreasoned. This light signal could attract pollinators.

However, Holt didn't think everything thatthe film makers dreamed up was credible. She was told early on that the Pandoran plants communicatedwith each other through nerves.

"I said no way," Holt recounts.

She advised them that a better explanationwould be "signal transduction," which is seen in terrestrial plantswhen?for example?a root lacking water "tells" the leaves above towilt. How this message is sent is unknown, but it may involve electricalsignals or biochemical reactions involving small molecules.

"We don't know enough yet about signaltransduction to say that Pandora's plants aren't using it," Holt says.

"That was my one line," Holt jokes.

But for all its botanical inventiveness, thefilm didn't break any new ground with the color palette.

Nancy Kiang of the NASA GoddardInstitute for Space Studies does research on the pigments that alienplants might use to best absorb a different spectrum of light coming from astar unlike our Sun. Her research shows that while plants on alien worlds couldbe green like they were in the movie, they could also be yellow, orange, black,or even near-infrared colors we couldn't see.

"Plants on Earth are already so diverse,beautiful, and weird -- carnivorous plants, cacti, basketball-size seed pods, bioluminescent algae -- Pandora didnot actually look all that exotic to me, especially, of course, since theplants were largely green," says Kiang.

Plants look green to us because theyreflect rather than absorb that light wavelength. Holt saw some early drawingsthat showed the plants being all blue, but she thinks that green was lateradopted to make Pandora more appealing.

Kiang says that alien plants wouldprobably not be blue, since plants prefer to absorb blue wavelengths.  Theexception to this rule might be if they are bombarded with a lot of light. Inthat situation, a plant might use sunscreen pigments to prevent itslight-harvesting apparatus fromgetting overloaded, and excess blue light would be reflected.

"I suppose it would have been hard towatch the movie if it were shot in the light of a sun having a differentspectral quality, so Cameron had to make an aesthetic decision," Kiangsays. "I'm glad he at least has provoked thought about how life mightevolve differently on anotherplanet."