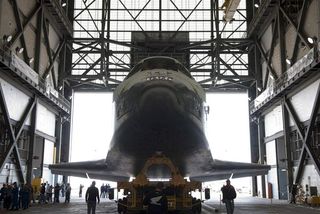 Inside the Vehicle Assembly Building, or VAB, at NASA's Kennedy Space Center in Florida, workers watch as space shuttle Discovery moves along the transfer aisle on Feb. 22, 2010 so it can be attached to its 15-story external tank and twin solid rocket boosters. Launch is scheduled for April 5.
(Image: © NASA/Jim Grossman.)

NASA's space shuttle Discovery moved a step closer to a planned April 5 launch Monday, a day after its sister ship Endeavour returned to Earth from its own space mission.

Discovery moved from its maintenance hangar to the cavernous Vehicle Assembly Building at NASA's Kennedy Space Center in Florida, where the 100-ton spaceship is being hoisted into vertical position and attached to its fuel tank and twin solid rocket boosters.

NASA is preparing Discovery to launch the STS-131 mission to the International Space Station to deliver new science equipment and spare parts. Liftoff is set for 6:27 a.m. EDT (1027 GMT) on April 5.

The shuttle made the short trip to the Vehicle Assembly Building Monday morning, about 12 hours after the Endeavour orbiter's Sunday night landing at the Kennedy Space Center to end its own STS-130 mission. Endeavour's two-week flight delivered a new room to the station as well as a phenomenal lookout dome that gives astronauts panoramic views of Earth from space.

Yamazaki and six NASA astronauts will blast off aboard Discovery to fly a 13-day mission to the International Space Station.

The mission is commanded by veteran spaceflyer Alan Poindexter. Three spacewalks are planned.

NASA originally hoped to launch Discovery on March 18. But an unusually long cold snap in Florida prevented the shuttle's move to the Vehicle Assembly Building because of low temperatures. The agency planned to move Discovery out of its hangar today, but opted to roll the shuttle over on Monday because better weather was expected, Beutel said.

The cold weather forced NASA to delay the shuttle's launch until April 5 in order to avoid a space traffic conflict with a crew change on the space station in late March and early April.

Discovery's STS-131 mission is the second of NASA's five final shuttle missions this year before the three-orbiter fleet is retired in the fall. After that, astronauts will have to ride on Russia's Soyuz vehicles to reach the nearly complete space station.

NASA's Constellation plan originally in charge of building new rockets and spaceships to replace the shuttle fleet was cancelled earlier this month by President Barack Obama. The agency is banking on the development of new commercial spacecraft to launch American astronauts into space.