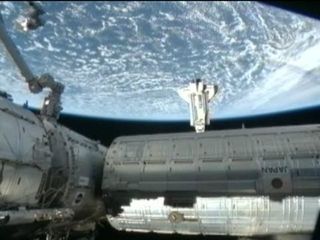 Space shuttle Endeavour is seen by a camera on the exterior of the International Space Station just before its midnight docking on Feb. 10, 2010 during NASA's STS-130 mission. Japan's giant Kibo laboratory is seen in the foreground.
(Image: © NASA TV.)

The space shuttle Endeavour and its astronaut crew made a midnight docking at the International Space Station Wednesday to deliver NASA's last big room and a new set of windows to the high-flying laboratory.

Hatches between Endeavour and the space station were opened just after 2 a.m. EST (0700 GMT). That's when Endeavour's six astronauts, with broad smiles and big hugs, joined the five-man crew of the station, boosting the population of space up to 11 people while the joint mission is under way.

"We're happy to see our friends," station commander Jeffrey Williams told his guests after they floated aboard. "Some of us are really happy because we haven't seen many people other than the crew for a long time."

The station is currently home to two American astronauts, two Russian cosmonauts and a Japanese astronaut. The station astronauts said they had made a special "Welcome" sign for their guests and greeted them with hearty laughs, at times saying "Welcome aboard!" and "It's good to see you!"

A trajectory sensor in Endeavour's payload bay used to measure the distance between the shuttle and space station failed to work properly during the rendezvous. Instead, the astronauts relied on a handheld laser tool and their own eyes to make up for it.

"We are glad to be here, it was absolutely beautiful coming on up," Zamka said after boarding the station. "As we were looking out the window we just couldn't believe how spectacular and shiny the space station was. After awhile I just quit looking at it because I kind of didn't to think about docking at this big, beautiful station."

Tranquility will hold the station's main life-support systems, robotic arm station and other gear. The seven-window Cupola, which includes a round central pane that is the world's largest space window, will be attached to an Earth-facing port on Tranquility to give astronauts their ultimate window on the world.

The new station additions represent NASA's last big add-ons for the $100 billion space station, which has been under construction since 1998 by five different space agencies representing 16 countries. The space station will be 98 percent complete once they're installed.

"We're ready to bring up Tranquility and Cupola and work with you guys to bring it to life, so this is a beautiful day," Zamka said.

Both additions were built for NASA by the European Space Agency. Together, they cost nearly $409 million and will require three spacewalks by astronauts to install. The first spacewalk of the mission begins Thursday.

Before docking, Zamka flew Endeavour through an orbital back flip below the space station so Williams and his crewmates could snap hundreds of photos of the orbiter's tile-covered underbelly.

The photographs will be analyzed for any new dings and scrapes caused by debris during Endeavour's Monday morning launch into space. Cameras showed a few pieces of foam debris falling from the shuttle's fuel tank during liftoff, but none appeared to damage the orbiter, mission managers said.

A detailed inspection of Endeavour's wing edges and nose cap by the shuttle astronauts also turned up no major concerns. A final analysis of that data and the new images will take several days, mission managers said.

NASA has kept a close watch on shuttle health since 2003, when heat shield damage led to the loss of shuttle Columbia and its seven-astronaut crew.

Endeavour astronauts did spot a piece of a so-called "flipper door" seal sticking up from the top of Endeavour's left wing and sent photos of it to Mission Control for analysis.

The seal is used to control venting air from an avionics cavity inside the shuttle's wing during launches and landing, said LeRoy Cain, NASA's deputy shuttle program manager. It is one of many attached to access doors on each of the shuttle's wings. The protruding piece is near the aft of the left wing and not a safety concern to the orbiter or its crew, Cain said.

The top of a shuttle's wing does not see the hot, scorching temperatures experienced by its underbelly during re-entry, Cain said. The seal is also about 3 feet long, with only a small 4-inch strip peeled up at its leading edge, he added.

"From a mechanical and structural perspective, it's really not going to pose a problem for us," Cain said.

Endeavour will spend about eight days docked at the space station to deliver the Tranquility node and the Cupola. The shuttle is due to return to Earth on Feb. 20.