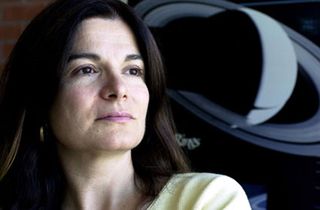 Carolyn Porco was 13 years old when she experienced her first 'cosmic connection'. She was on a rooftop in the Bronx, of all the unlikely places, peering through a friend's telescope when she caught her first glimpse of Saturn. It was a pivotal moment for Porco, now leader of the imaging team on the Cassini mission to the ringed world, as it was then where she discovered her life's passion.

Some astronomers fall in love with their craft by building their own telescopes, and only after they view the stars do they begin to be enraptured by the vastness of space. For Porco, it was the other way around.

"I wasn't a tinkerer, I was a thinker, a seeker," Porco said. "I got into astronomy through an interest in religion. I read about eastern philosophy and religion and existentialism. All that introspective thinking got me thinking about the great beyond. That turned my sights from inwards to outwards, and I started becoming interested in the makeup of the universe and I started reading about astronomy, planets, and galaxies."

By the time she was in high school she had developed a deep interest in astronomy. She saw the first images of Mars from the Mariner mission in the early '60's and knew that she wanted to explore planets. She went to the State University of New York in Stony Brook to do her undergraduate work in astronomy before going to California Institute of Technology, where she earned her doctorate.

While at Caltech, which runs NASA's Jet Propulsion Laboratory, Porco got her first real hands on experience exploring other planets.

"While I was there, Voyager flew by Saturn. I got involved with a person who was a member of the imaging team and started working on data from Saturn," said Porco in an interview with Space.com. "With all that data coming in, the imaging team didn't have enough hands or scientists to work on all of it."

Because of the lack of hands, a gem that would help define her career fell into Porco's lap. She was the first person to work on data from Saturn's eccentric ringlets and the "spokes" in the B ring, two projects she would do her dissertation on. As she progressed with her work on ringlets and "spokes", she discovered a connection between them and Saturn's magnetic field.

"I'll never forget when I realized there was this connection - it was tremendous to know something that no one else on the planet knew," said Porco, joking that she felt a bit like Galileo. "It was a "eureka" moment -- a time when you come to understand one of nature's secrets."

Because she understood this particular secret so well, she continued to contribute to the Voyager mission as the fly by images of Uranus, which has rings similar to Saturn's, were being gathered in 1986. As a member of the imaging team, she played a large role in planning the imaging sequences of the Uranian rings. By the time Voyager was passing Neptune in 1989, Porco was leading a small band of scientists interested in Neptunian rings on Voyager's imaging team.

Going back to Saturn

Just six months after the Voyager mission ended, Porco applied for the team leader position on the Cassini mission to Saturn. On a day she will never forget, November 13, 1990, she was informed that she had been appointed team leader, beating out many more senior applicants in doing so. The appointment was the beginning of 14 years of demanding work.

The Cassini mission has many goals, including measuring Saturn's huge magnetosphere, performing close up analysis of the rings, and studying the composition and atmosphere of both Saturn and its largest moon, Titan. And, of course, to provide stunning images of one of our solar systems most alluring planets.

The heavy emphasis on imaging, both for artistic and scientific purposes, places a huge responsibility on Porco and her team. The first real images that Cassini sent back, of the Earths moon and the Masursky asteroid, proved that the imaging equipment was working and working well -- a great relief to Porco and her team.

"The first real Cassini image that brought tears to my eyes was an image of Jupiter. I didn't expect it to look so detailed."

Spending 14 years working on the Cassini mission has been a demanding task. Much of the mission's success is due to the sweat of the scientists working on the mission, who have been asked to sprint for the duration of a marathon.

With plans for Cassini to continue gathering data for nearly four more years, there is still a great deal of work left to do. Cassini is sending back scads of data and images each day for scientists to pore over. As Porco says, it's not so much a mission as a way of life. But it's a way of life that she seems to enjoy.

"It's been an adventure just getting out to Saturn," said Porco. "Saturn is such an alluring photographic target. It's a joy, really, to be able to take our images and composite them in an artful way, which is one of my cardinal working goals. It's about poetry and beauty and science all mixed together."

Aside from making the returned data and images artful, Porco feels responsible to provide the public with an amazing experience similar to what she was going through. "Ever since launch I have wanted to give people a sense of adventure. That they were riding along with us on the spacecraft."

Working around-the-clock on Cassini doesn't allow Porco much time for reflection, but as someone who has played distinctive roles in two of the most grandiose explorations of space, she can draw interesting comparisons between the two missions based on her experiences.

"Nothing will ever be what the Voyager mission was," said Porco. "It was that mission that showed us what the solar system was like. It was a tremendous exploratory mission that was conducted over a decade. It was Homeric in nature. There would be episodes of tremendous discovery, and then it was back into the boat, so to speak, and on to the next port.

"Cassini is different -- it's a mission of enormous scope and is being conducted in grand style. It is much more sophisticated than Voyager," continues Porco. "I can't say it's got that flavor of romance, though. Voyager was very romantic. Cassini is spectacular."

One reason Porco feels differently about the two missions is because of the role that she has played in each. During Voyager, she was still doing her graduate work and just starting to cut her teeth on planetary explorations, but her role as team leader for the Cassini mission takes on a completely different meaning for her.

"Being the team leader on Cassini is the best job in the inner solar system. Voyager was a gift that was given to me to participate in. My contributions on Cassini are my gift to the world."

The upcoming year will be an extremely busy one for Cassini and its earthbound counterparts as the satellite will be making a total 13 flybys past five of Saturn's moons. Eight of those flybys will be past Titan in order to achieve the necessary gravitational assistance to check out the other moons.

Between April and September the inclination of Cassini's orbit will be increased, allowing the camera to take pictures looking down onto Saturn's rings. The navigation for these flybys and observations has been planned long in advance, but as more images are taken and new objects are discovered, such as new moons, Porco's crew will need to continuously develop new camera commands to take images of these intriguing objects.

"We do retargetable observations of such objects. We find a new moon, determine its orbit and then use that information to predict where the moon will be at a later time so that we can take a closer look at it," explained Porco. "It's a very deadline driven activity."

When work is finally complete on the Cassini mission, Porco will shift her gaze to the most outer planet in our solar system, Pluto, and beyond. She is an imaging scientist on the New Horizons mission, which will provide us with the first look at Pluto and other bodies in the Kuiper Belt, and is on schedule to reach Pluto in 10 years.

The goal of the mission, aside from getting great pictures of objects never seen up close before, will be to observe Pluto's tenuous atmosphere and try to understand is nature. Observations of objects in the Kuiper Belt, which are believed to be some of the oldest objects in our solar system, could provide insight as to how the planets formed. "In exploring Pluto and the Kuiper Belt, we will be going as far back in time as we can in this solar system," said Porco.

The New Horizons mission will hold special meaning to Porco, who will be able to tick off another notch on her planetary belt. "[It's] a tremendous feeling of closure, as a member of Voyager, to have visited Pluto and all the bodies in our solar system," said Porco.

In 1998, Porco's decades of work were recognized as she officially became a part of the realm she studies. As if out of an astronomer's dream, Asteroid (7231) Porco was "named in honor of Carolyn C. Porco, a pioneer in the study of planetary ring systems...and a leader in spacecraft exploration of the outer solar system."

But what Porco is really proud of, and what she hopes she will be remembered for, is the work she has done to help bring the planets in our outer solar system a little closer to Earth. It is her life's work, and aside from building her own legacy, she has treasured the experience.

"Being among the first people to show humankind what our solar system was all about was a tremendous privilege. It will be remembered forever. The gratification that one feels when participating in these types of missions is enormous."