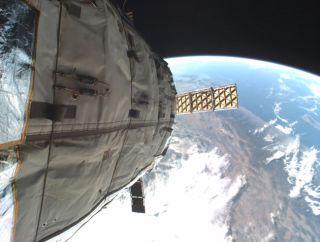 A camera on one of Genesis I’s aft solar panels eyes a clear glance at the western coast of Mexico leading out to the Pacific Ocean. Just visible in the right side of the image is the southern tip of Baja California.
(Image: © Bigelow Aerospace.)

It's been a wild and crazy ride in space since the first decade of the 21st century began, but as it nears its close the realm of commercial space travel has taken one giant leap into reality. Now, commercial space is on a growth-curve, with a whirlwind of large and small companies ready to offer a variety of skills.

There is growing recognition of this fact, evidenced by the recent Review of U.S. Human Space Flight Plans Committee — a report that spotlighted the commercial space industry, advising NASA to encourage and use more commercial space services to support future human space missions.

Even so, the coming year is shaping up like a space-based game of "Truth or Dare."

Some see a tradition-breaking paradigm in the offing, one that increases the reliance on the private sector for space tasks. Others are not sure, envisioning risky hand-shakes with firms that offer little in the way of track record.

There's a roster of big moments in commercial spaceflight throughout the last decade.

Over the last 10 years, Space Adventures, headquartered in Vienna, Va., has organized flights for well-heeled clients to the International Space Station. That highfalutin enterprise was kick-started in 2001 by the flight of Dennis Tito — billed by the company as the world's first private space explorer. Since then, six other wealthy space enthusiasts (most recently, Canadian billionaire and Cirque du Soleil founder Guy Laliberte) have paid up to $35 million for similar treks.

Then there were the first private suborbital space treks via SpaceShipOne, bankrolled by the Microsoft-made billionaire, Paul Allen. Aerospace maverick, Burt Rutan and his Scaled Composites squad pushed the frontiers of private space travel. In doing so, they won in 2004 the $10 million Ansari X Prize for commercial spaceflight. That momentum is resident in the rollout of SpaceShipTwo earlier this month — a six-passenger, two-pilot suborbital craft backed and operated by Sir Richard Branson's Virgin Galactic.

Toss in for good measure, two privately-funded prototype expandable space habitats that now circle the Earth. They were orbited courtesy of motel and construction mogul, Robert Bigelow, aided by his Bigelow Aerospace team in Las Vegas, Nev. Those Genesis 1 and Genesis 2 vessels launched in 2006 and 2007, respectively, are precursors to ever-larger modules and space facilities the firm plans to orbit in future years.

Space Exploration Technologies Corporation (SpaceX) of Hawthorne, Calif., was self-financed in 2002 by PayPal co-founder, Elon Musk. Over the last eight years, the company — and its now 800 SpaceX team members — has forged ahead with development of its Falcon 1 and Falcon 9 boosters, as well as its Dragon spacecraft built to satisfy NASA's Commercial Orbital Transportation Services (COTS) program objectives.

For true space grit, several smaller space firms have blasted their way to the forefront, such as XCOR Aerospace of Mojave, Calif. Kudos were deservedly earned by Masten Space Systems, also of Mojave, as well as Armadillo Aerospace based in Rockwall, Texas. This dynamic duo pocketed prize money by competing in the NASA-backed, Northrop Grumman-sponsored Lunar Lander Challenge. The two winning companies qualified for cash prizes — managed by the X Prize Foundation — by building and flying vertical-takeoff-and-landing vehicles that hovered for up to 180 seconds, translated horizontally, landed under rocket power, and repeated the feat in two hours.

So there you have it: Development of privately-financed suborbital vehicles; increasing numbers of "pay-per-view" space travelers; commercial boosters and spacecraft for carriage of cargo and humans to and from Earth orbit.

Admittedly, this is a shortlist of milestones — but the trends are clear.

Nevertheless, all this "work-in-progress" remains just that. For several experts, major hurdles remain.

At first blush, it would seem there's been a shift towards the federal government embracing commercial spaceflight as a "crutch" to deal with an ailing NASA — a space agency viewed by some as in bureaucratic freefall and in need of transitioning to a more commercial-friendly realization.

"It's a complex issue ranging from legal to very practical issues," one that is an international issue as well as a domestic one, suggested Henry Hertzfeld, Research Professor of Space Policy and International Affairs and Adjunct Professor of Law at the George Washington University in Washington, D.C.

"To me, the bottom line test focuses not on commercial or government, but on who is really taking the risks, both financial and technical," Hertzfeld said. "And, if you put almost all of the 'commercial' partnerships to that test," he continued, "I think you will find the government is footing the risk in most cases, which means they will also end up paying for it eventually in one way or another."

One of the most fascinating developments of the last decade, commercial space has become "the cool kids" table — for a surprising number of very wealthy individuals, observed Carissa Christensen, Managing Partner of the Tauri Group in Alexandria, Va.

"Their personal commitment has enabled firms developing commercial space vehicles to weather recent economic storms, either through their own deep pockets or because their credibility as global entrepreneurs has attracted other investors," Christensen told SPACE.com.

Christensen stressed that balance is important in viewing the relationship between government and industry in commercial space.

"Many areas of government reliance on industry are sensible and should be part of a durable national strategy, Christensen added. For example, government funding of research and development, purchases of commercial satellite services, and contracting for launches, hardware, and engineering support.

"There is a baby/bathwater thing to be careful of here," Christensen said.

What about major obstacles ahead for commercial spaceflight?

"The biggest one is generating enough revenue to create a durable, viable industry. The challenges the industry faces are business challenges, far more than technology challenges," Christensen responded. "Just as a reminder," she added, "Concorde shut its door, and that wasn't because supersonic flight was too much of a technology challenge — it was because, ultimately, the business case didn't close."

All that being said, Christensen's view of today's private sector landscape, and drawing upon her background of working in commercial space since 1987: "This is by far the most thrilling period I have seen!"

"What we are seeing in NASA is not a tidal shift in its relationship to the private sector — but a small step towards a practical approach to space," said Rick Tumlinson, co-founder of the Space Frontier Foundation and a devoted NewSpace activist and agitator. "This is occurring because of years of pressure, repeated demonstrations of the private sector's ability to perform, financial necessity and the gradual ascension of those who 'get it' within the ranks of the space agency."

Tumlinson said that if NASA is to ever move beyond low Earth orbit and get back to the sorts of exploration missions it did in the glory days of Apollo, "it must hand off operations to the people."

Co-operation in opening the frontier is the new key to success for all, Tumlinson said: NASA gets lower costs and the ability to focus on its mission of exploration while commercial space gets the funding and early catalytic markets it needs to grow and become vital on its own.

"Everyone wins — especially the people who pay for it all, as they get an open and expanding new frontier in space," Tumlinson stated.

Results in place of rhetoric

It's time for the commercial space sector to walk the walk, not just talk the talk.

"Now is the time for the commercial sector to deliver on its promises," Logsdon said. "A government-commercial partnership can provide the stimulus for much more rapid space development than we have seen in recent years. Then 'purely' commercial activities such as space tourism can follow," he concluded.