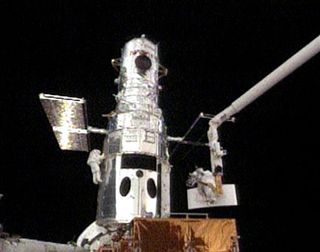 Flying in space may be the ultimate rollercoaster ride, but 2009 saw more than its share of ups and downs in the realm of robotic and human spaceflight.

This year, old robotic explorers spun their wheels on Mars, probes crashed into the moon on purpose, and a crack team of astronauts gave an aging space telescope one last facelift during one of the most daring space shuttle missions in history. And that's just for starters.

Here's a look back at the nine best spaceflight stories of 2009:

Early in 2009, NASA faced a surprising, if hilarious, challenger this year in the form of comedian Stephen Colbert. As host of the faux conservative television news show "The Colbert Report," Colbert urged his online fandom to use a write-in option for a NASA naming contest involving a new International Space Station module. He amassed 230,000 votes — and won.

The exercise in Web 2.0 democracy thrust the space station back into the public limelight, and showed how NASA could engage new audiences in the thrills of space exploration. Such unexpected voting results also led to some dithering on NASA's part, but the U.S. space agency soon cracked a smile and floated the alternative idea of naming a space toilet after the comedian.

NASA ultimately named the new station module Tranquility, but Colbert's enthusiastic space advocacy eventually earned him a different namesake — a $5 million space treadmill to help astronauts stretch their legs. The treadmill launched to the space station in more than 100 pieces in August and was assembled in October.

8. Japan Leaps Onto the Spaceship Scene

Japan flexed its space power by launching its first space freighter to ISS in 2009, and in doing so offered a new spacecraft for the upcoming post-shuttle era.

The unmanned — and disposable — H-2 Transfer Vehicle (HTV) launched in September atop a brand-new H-2B rocket and required the first-ever capture of a free-flying spacecraft by the space station. Astronauts the station's robotic arm to pluck grab the cargo ship and attach it to their outpost during its maiden voyage. The HTV also represents the only freighter currently capable of delivering cargo for use inside the space station, as well as exterior platform experiments.

HTV joins Europe's Automated Transfer Vehicle (ATV) cargo ships and Russia's workhorse Progress spacecraft as part of the robotic fleet that helps resupply humanity's lone orbital outpost. But Japan also has its eyes on future variants that could allow for proper reentry rather than burning up in Earth's atmosphere, not unlike European proposals to refit the ATV freighter.

The 11-year-old International Space Station hit its highest crew — six people — and then dipped down to a skeleton crew of two during the course of the year. It also experienced temporary crowding to reach its highest occupancy ever  (13 people) when seven astronauts from NASA's shuttle Endeavour joined the six-man crew aboard the space station in June.

Most of the crowd had thinned out by December and left just a NASA astronaut and Russian cosmonaut aboard the space station for several weeks. The two orbital outpost residents compensated for lack of manpower by devoting more of their time toward maintenance rather than scientific research, and eventually welcomed three new spaceflyers wearing Santa hats just before Christmas.

Such boom-bust population surges herald a busy future for the space station, which has received a life extension beyond its original 2016 retirement date.

The February crash of two satellites in orbit — and the resulting swarms of space junk created in the collision — sparked new efforts to tackle the growing problem of human trash in space. The collision not only increased the risk of damage to satellites and astronauts in orbit, but also uncovered gaps in collision avoidance monitoring systems and spurred new looks into orbital clean-up efforts.

About 800 satellites crowd the orbital lanes above the Earth, along with more than 20,000 pieces of space junk such as dead satellites, spent rockets, and even tools that escaped astronauts during spacewalks. That has prompted the U.S. Strategic Command to consider upgrading its ability to track pieces of orbital debris. It has also encouraged government agencies and private researchers to imagine ways of cleaning up the cloud of debris.

NASA even joined with the Pentagon's Defense Advanced Research Projects Agency (DARPA) to begin brainstorming innovative solutions, ranging from roving robotic cleaners to rapid-fire laser pulses. Whether they can succeed in finding an effective, affordable solution may have a major impact on the increasingly busy future of spaceflight.

Space continues to transform from the final frontier into a new business opportunity for many entrepreneurs. Two of the biggest names in the private space sector, Virgin Galactic and Space Exploration Technologies (SpaceX), each took steps this year toward realizing their respective visions of putting more people into space.

British billionaire Richard Branson recently unveiled Virgin Galactic's SpaceShipTwo, which evolved from a SpaceShipOne design that claimed the $10 million Ansari X Prize by flying repeat ventures into suborbital space in 2004. The six-passenger SpaceShipTwo forms the flagship for Virgin Galactic, or what Branson likes to call the world's first commercial spaceline. Plenty of would-be space tourists have already bought Branson's vision at $200,000 per seat aboard future spaceflights.

SpaceX, established by PayPal co-founder Elon Musk, plans to help NASA haul cargo, and eventually astronauts, up to the space station after the shuttle fleet retires. The company's fifth Falcon 1 rocket successfully delivered a Malaysian satellite into orbit in July, as part of the prelude to the larger Falcon 9 rocket's planned launch in 2010. Falcon 9 is slated to launch SpaceX's Dragon spacecraft that could carry both cargo and humans into space.

Congress has even begun looking into standards for astronaut safety aboard commercial spacecraft, if such a day should come. That, along with a NASA spaceship proposal from space hotel proponent Bigelow Aerospace, shows just how serious private spaceflight has become as 2010 draws near.

The big story on Mars this year has been Spirit, one of NASA's hardworking twin Mars rovers, which became mired deep in sandy Martian dirt back in April. That led to an agonizing saga of on-again, off-again attempts by rover handlers to free the robot from its sand trap throughout the year, which may continue in 2010.

The plucky rover and its twin Opportunity landed on the red planet in January 2004 and have long since exceeded their lifetime expectations. But Spirit's luck apparently ran out when it broke through a hard dirt crust and became stuck in soft, powdery material below.

NASA reported unexpected movement in late December from Spirit's right-front wheel, which experienced power failure back in 2006 and had actually forced the rover to drive backwards ever since. Whether Spirit can summon up enough mechanical grit to escape its current predicament remains uncertain, but it has still managed to make some new scientific discoveries with its spinning wheels.

NASA's moon-smashing plans seemed simple — send the LCROSS probe crashing into a crater near the lunar south pole and watch for signs of water-ice within the impact plumes. Some initial buzz trailed off into confusion as hopeful scientists and members of the public failed to see any debris plume from the impact on Oct. 9, despite the many telescopes pointed at the site. But redemption was right around the corner, as scientists sifted through data from LCROSS and its sister Lunar Reconnaissance Orbiter.

A triumphant NASA announced solid proof of water-ice on the moon in November. The LCROSS sledgehammer blow revealed bucket loads of icy stuff hidden in the target crater, where permanent shadows and a lack of sunlight could keep water frozen.

Scientists have yet to determine how that water-ice reached the moon, and uncertainty remains about how future astronauts could mine such water. Nonetheless, the discovery of water in significant amounts has dramatically changed both scientific understanding and the future of space exploration.

It was a mission so risky, NASA had a second space shuttle on standby as a rescue ship. But the seven astronauts of the shuttle Atlantis successfully overhauled the 19-year-old Hubble Space Telescope after a marathon of five back-to-back spacewalks in five days. They added new instruments, and revived broken cameras, to leave the observatory more powerful than ever.

The shuttle Atlantis launched for its Hubble repair mission on May 11 as the shuttle Endeavour stood by in case Atlantis ran into trouble. Hubble's higher orbit and different inclination, or tilt, from the International Space Station meant that Atlantis could not fall back on the space station as a last refuge.

So why did NASA roll the dice with its shuttle fleet, already diminished by the earlier losses of Challenger and Columbia? The Hubble Space Telescope represented a $10 billion investment by NASA over the past 19 years, and one that had paid off handsomely with some of the most iconic space images and profound discoveries about the universe.

The calculated gamble not only succeeded in restoring Hubble's vision, but actually improved its sight. Hubble can now peer back in time to 500 million years after the theoretical Big Bang that started the universe, or about 13.2 billion years ago. That should keep Hubble huggers happy well into 2010 and beyond.

1. Future of NASA in Doubt

NASA showed renewed vigor by launching five shuttle missions this year (one more than in 2008) and added the first-ever launch of a moon rocket prototype into the mix. That determined showing contrasted with growing rumblings over whether the U.S. human spaceflight is winding down, or will get a new chance to shine.

The space shuttle fleet had one of its busiest launch seasons since 2002 as NASA counted down the remaining missions. The planned shuttle retirement in 2010 will leave a gaping hole in U.S. human launch capabilities for at least five years until the Constellation program can replace the shuttles with the new Ares rockets and Orion spacecraft. The successful Ares I-X launch marked the first step toward the new possible era for NASA, even with a parachute failurethat left a booster damaged.

But a lack of funding means that NASA is on an "unsustainable trajectory," according to an independent review of U.S. spaceflight capabilities by the Augustine Committee in October. The blue-ribbon panel criticized the current timetable for returning humans to the moon by the 2020s and then going to Mars, and suggested alternative missions that could still use the Ares rockets or commercial vehicles.

For now, NASA will almost certainly look to both international partners and commercial spaceflight as it moves forward into 2010. Experts have said a mix of options may ultimately offer a better guarantee of continued spaceflight success, even as the White House mulls its budget request for NASA in the new year.