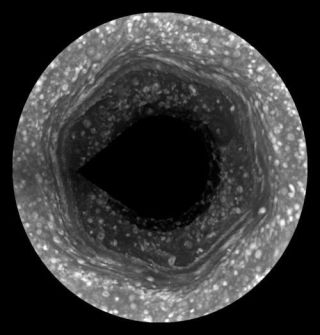 Camerasaboard NASA's Cassini spacecraft have captured images of a mysterioushexagon-shaped cloud formation that is likely formed by the path of a jet streamflowing around the planet's north pole.

The hexagon,which was discovered by the Voyager spacecraft in the early 1980s, encirclesSaturn with an estimated diameter wider than two Earths. The associated jetstream likely whips along the hexagon at about 220 miles per hour (100 metersper second).

"Thelongevity of the hexagon makes this something special, given that weather onEarth lasts on the order of weeks," said Kunio Sayanagi, a Cassini imagingteam associate at the California Institute of Technology. "It's a mysteryon par with the strange weather conditions that give rise to the long-livedGreat Red Spot of Jupiter."

The lastvisible-light images of the entire hexagon were captured by NASA's Voyagerspacecraft nearly 30 years ago, the last time spring began on Saturn. For thenext 15 years, the north pole was shrouded in darkness.

Cassini hasbeen orbiting Saturn since 2004, and unlike Voyager it has a better angle forviewing the north pole and provides higher-resolution images. But the longdarkness of Saturnian winter hid the hexagon from Cassini's visible-lightcameras for years. During this time, the craft's infrared instruments were abledetect the shape using heat patterns, with the resulting images showing thehexagon is nearly stationary and extends deep into the atmosphere. The imagesalso showed a hotspot and cyclone in the same region.

Just as thenorth pole emerged from winter in January, Cassini's cameras went to work. Imagingteam scientists stitched together 55 images to create a mosaic and a three-framemovie.

The scienceteam will search the images for clues about the causes of the hexagon, where itgets and expels its energy, and how it has stayed organized for so long. Theywill pay close attention to the newly identified waves that radiate from thecorners of the hexagon where the jet takes its hardest turns, along with the multi-walledstructure that extends to the top of Saturn's cloud layer in each of thehexagon's six sides.