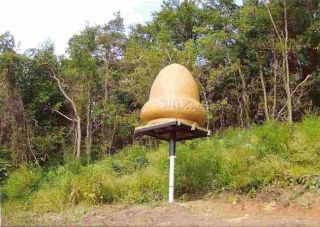 Mockup of the Kecksburg UFO made for the Unsolved Mysteries TV program in 1990. The object is displayed at the Kecksburg Volunteer Fire Department in Pennsylvania.
(Image: © Stan Gordon)

In thechronicles of UFO oddness, there?s been a long-standing oddity ? some sayfolklore, others deem it reality. This saga, now over four decades old, centerson a reported out-of-the-sky incident involving the small town of Kecksburg, Pennsylvania.

The date isDec. 9, 1965: Residents see a ball of fire shooting through the darkeningevening sky and then, seemingly, the object ? purportedly shaped like a jumbo-sizedacorn after impact ? makes some sort of controlled crash into the woods.From there, the strangeness factor escalates with purported military personnelisolating the area from curious onlookers and toting something out of the localeon a flatbed truck.

Whatevertook place in Kecksburg, a dutiful look into the episode escalated to a lawsuitagainst NASA for access to information on the incident.

A centralfigure in the weirdness is New York-based investigative journalist, LeslieKean. Working with the Coalition for Freedom of Information, she was on the receivingend of loads of documents ? an outcome of winning the lawsuit.

This stageof the saga began in 2002, when Kean was asked to spearhead a Freedom ofInformation Act (FOIA) initiative sponsored by the Sci Fi Channel ? an effortto acquire government documents on the Kecksburg case. The following year, sheended up as the plaintiff in a federal, FOIA lawsuit filed against NASA in Washington, DC.

?Afterpreviously promising to conduct an expedited search for files related to the1965 Kecksburg UFO crash case, NASA had stonewalled and was withholdingdocuments, leaving no recourse but this one,? Kean explained in a just-issuedreport. ?A settlement four years later, in October 2007, required NASA toprovide hundreds of new documents and pay my attorney?s legal fees.? ?

NASA?sresulting search, monitored by the court, was completed in August 2009. Theoutcome of the investigation is available in Kean?s paper, which was postedonline this month to the coalition?s Web site.

The report,flatly titled, ?The Conclusion of the NASA Lawsuit - Concerning the Kecksburg,PA UFO case of 1965,? explains how the process worked and the results of thesearch after the 2007 settlement in federal court.

The bottomline: No smoking gun documents were released, Kean notes, but many provocativequestions and unresolved contradictions were raised by what was received, aswell as by the fact that many files were missing or destroyed.

One open-endedaspect of Kean?s reportage is the role of ?Project Moondust? ? a U.S. government-run activity involved in examining non-U.S. space objects, or objects of unknown origin. Indeed, variousState Department documents show that NASA played a role in the recovery andexamination of space object debris.

Aftermonths of studying the material received, Kean reports that the trail is cold ?but with caveats.

?I amconvinced that something came down and landed in Kecksburg,? Kean told SPACE.com.

Kean thinksthat a UFO connection of the extra-Earth type ?is a possibility that has to beconsidered. It can?t be ruled out,? she said.

Otherpotentials, Kean added, ?include a very secret U.S. project or another nation?shardware. But both of these explanations are unlikely.?

Kean?sresearch indicates that it appears doubtful that the object in question waseither Russian or from any other country on our planet ? backed up by NASAorbital debris elucidation. Also, data from the U.S. Space Command and theRussian Space Agency fortifies the fact that whatever came down that day was nota Russian satellite or space probe, she stated.

?So I wouldrule that out, and say it?s either a UFO or a secret American device of somesort,? Kean said. ?If it was our own,? she added, ?why couldn?t they tell usabout this 40 years later??

Therefore, that?swhy the UFO possibility ?has to be kept in the running, as hard as it may be toaccept,? Kean said. ?Possibly it was some kind of secretive U.S. government project?or program?or the testing of something. Maybe it was highlyradioactive so they don?t want anybody to know about it.?

However, acentral take home message from Kean has no connection with alien visitation ?more a governmental encounter of the lack-of-transparency kind.

The efforthighlights the problems inherent to the use of the Freedom of Information Actin our democracy, Kean explained.

?It hasbeen a long, long process,? she said. ?The important thing about this hasnothing to do with UFOs. Itjust points out the problems with the Freedom of Information Act as it standstoday.?

The NASAlawsuit was made possible because of the support of a major television network,Kean said. Also add to the investigation, John Podesta -- President Clinton?sformer Chief of Staff -- an archival research group, a lawyer, and a publicrelations firm in Washington, D.C.

Larry Landsman, then Director ofSpecial Projects at the Sci Fi Channel (now Syfy), launched the UFO advocacyinitiative, with the Kecksburg lawsuit as one component of that larger undertaking.He is now an independent television producer working on various specialsand miniseries.

?In early 2002, a group of us beganto seriously explore what initiative could be launched that would beappropriate to the spirit of the network,? Landsman told SPACE.com. ?After muchbrainstorming, I proposed a campaign that pushed for the truth behind allof the many reports of UFOs and other unexplained phenomena. We were thefirst -- and so far, only -- company ever to pursue such an initiative and we attackedthe issue on a number of fronts both on air and off air,? he said.

As for Kecksburg, Landsmancontinued, ?we felt it was a case worth investigating,? supporting Kean?sFreedom of Information pursuit of the full and uncensored reports about the incident.

?There were too many lives that wereupended from this event and American citizens had -- and have -- theright to know the truth. Clearly many things are going on in our worldthat cannot be easily explained,? Landsman said. ?Polls show that a majority ofAmericans believe the government is covering up information on UFOs. Thetruth should not be kept in the hands of only a relative few at variousgovernment agencies and military departments.?

For StanGordon, a steadfast on-scene investigator of what took place in Kecksburg thosemany years ago, the case is far from closed.

?Myfeelings today in regards to the Kecksburg incident are unchanged. I remainconvinced that an object of still undetermined origin fell from the sky into awooded area near Kecksburg,? said Gordon.

Gordon told SPACE.com that multiple independent witnessesdescribed the object traversing the sky. As it turned and neared Kecksburg,the object was described as moving and descending slowly, as if making a controlledlanding.

?Thesemi-buried metallic acorn shaped object was observed on the ground by a numberof independent eyewitnesses. Whatever that object was, it was important enoughfor the military to quickly arrive on the scene and recover the object in question,?Gordon said.

One plausible theory, Gordon suggested, is that the object was an advancedsecretive human-made space device with re-entry control capabilities whichapparently failed. Another is that this could have beenan extra-terrestrial spacecraft, he noted.

?Untildefinitive evidence is found that will conclusively explain the object, I willcontinue to keep an open mind concerning all theories as to the origin of theobject,? Gordon concluded.

For Kean,even after years of work trying to unravel the Kecksburg incident, ?what tookplace there is an unanswered question.?