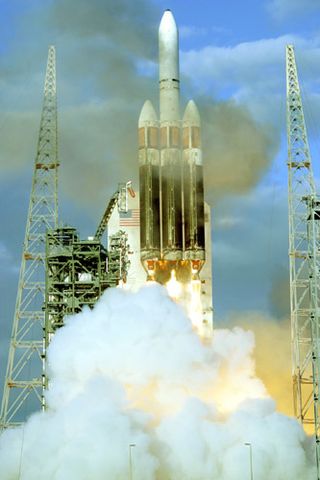 CAPE CANAVERAL, Fla. - While complex computer simulations are being run to understand what interrupted its main engines from finishing their firings, the entire six-hour maiden flight of the Boeing Delta 4-Heavy rocket was examined in deep detail last week as part of a planned post-mission review.

Officials sifted through mounds of data collected from liftoff through deployment of the mock satellite cargo during the Air Force-ordered test launch. The Defense Department awarded Boeing a $141 million contract to fly the first Delta 4-Heavy on a demonstration launch instead of carrying a real payload.

"It's important to remember that the primary payload for this mission was really the instrumentation we carried onboard," Col. Insprucker said. "Our investment in telemetry and additional special instrumentation is helping us quickly zero in on the cause of the anomaly, and I'm confident the data will also enable us to fine-tune all aspects of our future Delta 4 heavy-lift missions."

The December 21 flight was deemed a success despite a problem impacting the firing time of all three Common Booster Cores, which were strapped together to form the rocket's first stage. The Rocketdyne-made RS-68 main engine on each booster shut down several seconds early, causing a speed deficit that the rocket's upper stage could not overcome. The dummy satellite was delivered into an orbit much lower than planned and two nanosats were lost.

The ongoing investigation to determine why the engines stopped firing 8 seconds prematurely on the port and starboard boosters and 9 seconds early on the center stage has narrowed the list of possible culprits. The leading theory continues to be a condition called cavitation where liquid oxygen flowing through the feedline from the tank to the engine turns to gaseous oxygen. This phenomenon is believed to have occurred around internal sensors that are designed to tell the engines when to shut down. The sensors reacted to the bubbles, thought the boosters had run out of liquid oxygen and commanded the RS-68s to cut off. But each motor had plenty of liquid oxygen remaining in their tanks to finish the normal firing time.

Using the standard investigative tool known as a Fault Tree analysis, the team has cleared 42 of 49 potential causes, including the sensors themselves and the main engines. All 7 remaining branches in the Fault Tree involve various types of disturbances in the flow of liquid oxygen, the Air Force said.

"The team is meeting daily across multiple locations to complete the investigation," said Dan Collins, vice president of Boeing Expendable Launch Systems. "Determining root cause from the remaining 7 open branches is the top priority."

"Initial simulation runs have already given new insight into the flow dynamics in the feedline (velocity and pressure patterns). The team will progressively add details to the computer models to build up an accurate representation of the internal features of the tank and feedline, and to simulate the flight conditions at the time of the premature engine cutoff," the Space and Missile Systems Center said in a statement Friday.

"The simulation team will use these models, along with the flight sensor data, to identify where cavitation is most likely to have developed in the liquid oxygen flow for the Heavy demonstration flight conditions. The onset of cavitation is thought to be caused by a unique combination of vehicle acceleration, liquid oxygen level in the propellant tank, tank pressures, feedline internal features and flow rates in the feedline when the RS-68 engine is at full power.

"The team also plans to simulate liquid oxygen flow under flight conditions from previous Delta 4 missions, where the anomaly was not observed, to help verify the accuracy of the complex computer models."

Three previous Delta 4 missions have flown -- all successfully and on target -- in the so-called Medium configuration that features just one Common Booster Core. The Heavy design uses three booster cores in order to launch much heftier payloads.