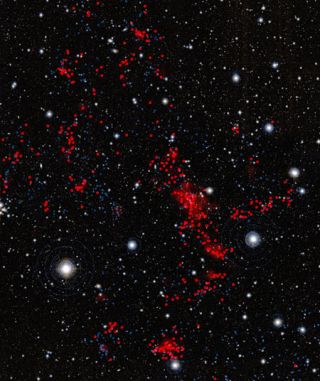 This image, obtained with the Subaru Telescope, operated by the National Astronomical Observatory of Japan was used by a team of astronomers to uncover a gigantic, previously unknown assembly of galaxies located almost seven billion light-years away from us. This structure was confirmed by further observations made using ESO’s Very Large Telescope and Subaru. The galaxies located in the newly discovered structure are shown in red. Galaxies that are either in front or behind the structure are shown in blue.
(Image: © ESO/Subaru/National Astronomical Observatory of Japan/M. Tanaka)

A gigantic, previously unknown set of galaxies has beenfound in the distant universe, shedding light on the underlying skeleton of thecosmos.

"Matter is not distributed uniformly in the universe,"said Masayuki Tanaka, an astronomer with the European Southern Observatory(ESO) who helped discover the galactic assemblage. "In our cosmicvicinity, stars formin galaxies and galaxies usually form groups and clustersof galaxies."

But those collections of matter are just small potatoescompared to larger structures long-theorized to exist.

"The most widely accepted cosmological theories predictthat matter also clumps on a larger scale in the so-called ?cosmicweb,? in which galaxies, embedded in filaments stretching between voids, createa gigantic wispy structure," Tanaka said.

These filaments are millions of light-years long and constitutethe skeleton of the universe: Galaxies gather around them, and immense galaxyclusters form at their intersections, lurking like giant spiders waiting formore matter to digest.

Scientists have struggled, though, to explain how thefilaments come into existence. While massive filamentary structures have often beenobserved at relatively small distances from us, solid proof of their existencein the more distant universe has been lacking until now.

The team led by Tanaka discovered a large structure around adistant cluster of galaxies in images they had taken earlier. They have nowused two major ground-based telescopes to study this structure in greaterdetail, measuring the distances from Earth to more than 150 galaxies, and,hence, obtaining a three-dimensional view of the structure.

The spectroscopic observations, detailed in the Astronomy& Astrophysics Journal, were performed using the VIMOS instrument on ESO?sVery Large Telescope in Chile and FOCAS on the Subaru Telescope in Hawaii, operated by the National Astronomical Observatory of Japan.

With these observations, the astronomers identified severalgroups of galaxies surrounding the main galaxy cluster.

The researchers were able to distinguish tens of suchclumps, each typically ten times as massive as our own Milky Way galaxy ? andsome as much as a thousand times more massive ? while they estimate that themass of the cluster amounts to at least ten thousand times the mass of theMilky Way.

Some of the clumps are feeling the fatal gravitational pullof the cluster, and will eventually fall into it, the data suggested.

This information will allow scientists to explore howgalaxies were affected by their environment at a time when the universe wasmuch younger.

The filament is located about 6.7 billion light-years awayfrom us and extends over at least 60 million light-years. The newly uncoveredstructure does probably extend farther, beyond the field probed by the team,and hence future observations have already been planned to obtain a definitemeasurement of its size.