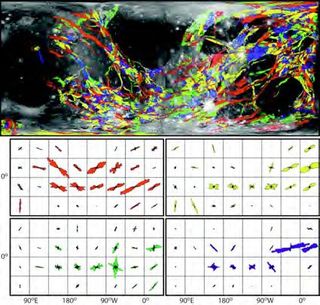 A global image mosaic of Jupiter's moon, Ganymede created with images from the Voyager and Galileo missions.
(Image: © Wes Patterson)

The map is the product of a seven-year effort and is onlythe third global geological map ever compiled for a moon in the solar system,after Earth?s moon and Jupiter?s crateredsatellite Callisto.

"The map really gives us a more complete understandingof the geological processes that have shaped the moon we see today," said WesPatterson, a planetary scientist at the Johns Hopkins University AppliedPhysics Laboratory in Laurel, Md., who led the map effort.

Patterson's team will present the map, created with data imagesfrom NASA?s historic Voyager and Galileomissions, on Wednesday at the 2009 European Planetary Science Congress in Potsdam, Germany.

With a diameter of 3,280 miles (5,262 km), Ganymede is thelargest moon in the solar system. Larger than both planet Mercury and dwarfplanet Pluto, it?s also the only satellite in the solar system known to haveits own magnetosphere.

While scientists have crafted several regional geologicalmaps of Ganymede?s surface using Voyager data, Patterson?s team was the firstto combine the low-resolution Voyager photos with high-resolution Galileoimages to create a global and consistent view of the moon?s geology.

The new map details geologic features that formed andevolved over much of our solar system?s history. These features record evidenceof the internal evolution of this large icy satellite, of its dynamicalinteractions with the other Galilean satellites, and of the evolution of thepopulation of small bodies impacting the surface of the satellite.

"By mapping the entirety of Ganymede?s surface, we canmore accurately address scientific questions regarding the formation andevolution of this truly unique moon," Patterson said. "Work doneusing the map by collaborator Geoff Collins at Wheaton College, for instance,has shown that vast swaths of grooved terrain covering the surface of thesatellite formed in a specific sequence. The details of this sequence tell ussomething about the forces that must have been necessary to form those swaths."

Patterson says scientists can look at Ganymede?s geologicalhistory as a ?touchstone? for comparing and contrasting the characteristics andevolution of other large to mid-sized icy satellites. The map will also, headds, be a reference for exploration of theJovian system.

NASA and the European Space Agency are currently developinga future voyage: the EuropaJupiter System Mission would include orbiters of Ganymede as well as theicy satellite Europa.

"A primary goal of the next flagship mission to theJupiter system will be to characterize, in detail, the geophysical,compositional, geological, and external processes that affect icy satellites,"Patterson said. "This map will be an invaluable tool in determining howbest to address those goals for Ganymede."