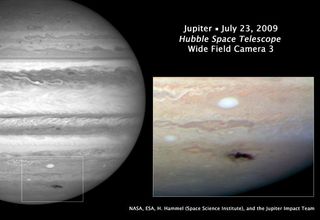 This Hubble picture, taken on 23 July, is the sharpest visible-light picture taken of the atmospheric debris from a comet or asteroid that collided with Jupiter on 19 July. This is Hubble's first science observation following its repair and upgrade in May. The image was taken with the new Wide Field Camera 3.
(Image: © NASA, ESA, and H. Hammel (Space Science Institute, Boulder, Colorado) and the Jupiter Comet Impact Team)

Jupiter already has an abundance of moons, but from 1949 to1961 it had another, temporary satellite in the form of a comet trapped in thegas giant's gravitational grip.

Comet 147P/Kushida-Muramatsu was captured as a temporary moonof Jupiter in the mid-20th century and remained trapped in an irregularorbit for about twelve years, astronomers announced today.

There are only a handfulof known comets where this phenomenon of temporary satellite capture hasoccurred and the capture duration in the case of Kushida-Muramatsu is the thirdlongest.

The discovery was presented today at the European PlanetaryScience Congress in Potsdam by David Asher of Armagh Observatory in Northern Ireland.

An international team led by Katsuhito Ohtsuka of the TokyoMeteor Network modeled the trajectories of 18 ?quasi-Hilda comets,? objectswith the potential to go through a temporary satellite capture by Jupiter thatresults in them either leaving or joining the ?Hilda? group of objects in theasteroid belt. Most of the cases of temporary capture were flybys, where thecomets did not complete a full orbit.

But Kushida-Muramatsu was different: The team used recentobservations tracking the comet over nine years to calculate hundreds ofpossible orbital paths for it over the previous century. In all scenarios,Kushida-Muramatsu completed two full revolutions of Jupiter, making it only thefifth captured orbiter to be identified.

"Our results demonstrate some of the routes taken bycometary bodies through interplanetary space that can allow them either toenter or to escape situations where they are in orbit around the planetJupiter," Asher said.

Asteroids and comets can sometimes be distorted orfragmented by tidal effects induced by the gravitational field of a capturingplanet, or may even impact with the planet. The most famous victim of boththese effects was comet D/1993 F2 (Shoemaker-Levy 9), which was torn apart onpassing close to Jupiter and whose fragments then collidedwith that planet in 1994. Previous computational studies have shown thatShoemaker-Levy 9 may well have been a quasi-Hilda comet before its capture byJupiter.

"Fortunately for us Jupiter, as the most massive planetwith the greatest gravity, sucks objects towards it more readily than otherplanets and we expect to observe large impacts there more often than on Earth.Comet Kushida-Muramatsu has escaped from the giant planet and will avoid thefate of Shoemaker-Levy 9 for the foreseeable future," Asher said.

The object that impacted with Jupiter this July, causing thenewdark spot discovered by Australian amateur astronomer Anthony Wesley, mayalso have been a member of this class, even if it did not suffer tidaldisruption like Shoemaker-Levy.

"Our work has become very topical again with thediscovery this July of an expanding debris plume, created by the dust from thecolliding object, which is the evident signature of an impact. The results ofour study suggest that impacts on Jupiter and temporary satellite captureevents may happen more frequently than we previously expected," Ashersaid.

The team has also confirmed a future moon of Jupiter. Comet111P/Helin-Roman-Crockett, which has already orbited Jupiter three timesbetween 1967 and 1985, is due to complete six laps of the giant planet between2068 and 2086.