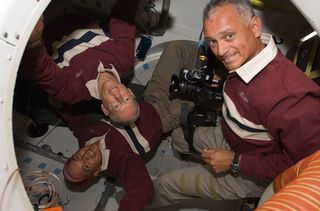 Astronauts Rick Sturckow (bottom), STS-128 commander; Danny Olivas (right) and Patrick Forrester, both mission specialists, are pictured near the hatch on the middeck of Space Shuttle Discovery after docking with the International Space Station on Aug. 30, 2009.
(Image: © NASA.)

Astronautsaboard the space shuttle Discovery have got a case of stuffy heads, but NASAdoesn?t think they?re sick.

Morelikely, the effects reported by theastronauts have more to do with crowd control and the pockets of carbondioxide generated when they gather in groups, space station flight controller HeatherRarick said.

"I don?tthink they have any ill health whatsoever," Rarick told reporters in an earlymorning briefing.

Discoverycommander Rick Sturckow radioed Mission Control early Wednesday to say his crewwas complaining of stuffiness and that it was a new experience when compared tohis three previous spaceflights.

He reportedit because Mission Control should know, but stressed that the discomfort wasrelatively low and would have no impact?"on our ability to function fully andcomplete the mission successfully."

Rarick saidthat the symptoms reported by the crew could be due to poor ventilation incertain spots between Discovery and the International Space Station.

A similarsituation hashappened before. In 1999, higher than expected carbon dioxide levels in thespace station?s Russian-built Zarya module were thought to have contributed toill effects reported by astronauts who complained of headaches and nausea. The symptomseased after the astronauts returned to their shuttle.

Rarick saidcarbon dioxide levels on the space station and Discovery should be within thenormal range. But it is possible that pockets of carbon dioxide could developas the astronauts work in close quarters with one another, she added.

There are13 people - a record-tying crowd - currently living on the linked space stationand Discovery - seven astronauts from the shuttle and six others on thestation. Rarick said that Mission Control and the astronauts have been vigilantin their efforts to ensure good ventilation between the spacecraft.

Astronautshave been trulysick in space before, most recently last year when a European astronaut hadto pass on a spacewalk due to a bad bout of space sickness. But Sturckow andhis crew underwent NASA?s regular quarantine procedures before launch to avoid developingan illness in space and are not medically ill, Rarick said.

Theastronauts are also not affected to the point where their orbital work is suffering,she added. Sturckow and his crew are in the middle of a 13-day mission todeliver new sciencegear and supplies to the space station and have been on or ahead of theirmission plan in terms of cargo transfer, mission managers said.

OnWednesday, the astronauts plan to move a pair of sophisticated racks of scienceequipment to study new materials and fluid physics in space aboard the station.They delivered a treadmill named after TVcomedian Stephen Colbert on Tuesday.

?As long asthey feel like they can continue to do their job, we probably won?t spend muchtime working on that problem,? Rarick said.