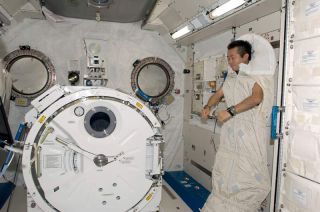 Japanese astronaut Koichi Wakata, Expedition 19/20 flight engineer, is photographed in a sleeping bag attached to the racks in the Kibo laboratory of the International Space Station in this May 7, 2009 image.
(Image: © NASA)

Astronauts may have some tough jobs in orbit - like building a $100 billion International Space Station - but apparently getting a good night's sleep isn't one of them.

In fact, sleeping is pretty comfy in space because you can slumber without gravity's incessant pull, according to Canadian astronaut Julie Payette, who has been living aboard the linked space station and shuttle Endeavour for more than a week.

"We sleep very well in space. Can you imagine?" Payette told reporters in a recent interview broadcast by NASA. "We have a sleeping bag each, and when you get into it you float in the sleeping bag. The sleeping bag floats in the module. So all you have to do is just attach it somewhere, which is a good idea by the way because during the night while your sleeping you might start drifting and end up somewhere you didn't intend to be in the first place."

Japanese astronaut Koichi Wakata, who is returning home aboard Endeavour after living on the station for 4 1/2 months, has said that anchoring yourself at night is key because otherwise you might bump into sensitive computers and equipment and switch them on accidentally.

Some astronauts have complained in the past that the first night's sleep in space can be fitful because their minds are racing ahead to the coming mission's complexity. But Endeavour's six-man, one-woman crew is in the homestretch of a 16-day spaceflight that included five challenging spacewalks to deliver spare parts and a Japanese experiment porch to the space station.

About the only thing missing, Payette said, is a shower. The thing that makes sleeping in space so comfortable - that weightless feeling - also makes it impossible to start the next morning with a refreshing shower.

"Of course, we're in weightlessness, so a showerhead with water dripping on top of your head would not work," Payette said. "We don't have a shower. We don't even have a faucet or a tap."

NASA's first space station, Skylab, and Russia's Mir space station did include a shower facility for crewmembers. On Skylab, astronauts floated into the shower, pulled up a privacy curtain, and were able to shower in water from a push-button hose and dry off using a vacuum system.

But on the International Space Station and NASA shuttles, astronauts have a squirt gun that shoots water and a wash cloth. They also have a special rinse-less shampoo to keep their hair clean.

"We wash like we would if we were on an expedition or a camping trip or something," Payette explained. "It works."

Payette and her crewmates aboard Endeavour are slated to leave the space station on Tuesday and land Friday at NASA's Kennedy Space Center in Florida.