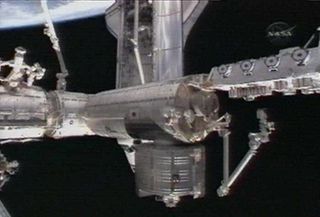 The space shuttle Endeavour is seen docked with the International Space Station in this July 27, 2009 view from an exterior camera. Japan's massive Kibo lab dominates the foreground. At right is the external porch delivered by Endeavour, while Canada's Dextre maintenance robot is seen at left.
(Image: © NASA TV.)

The 13people aboard the International Space Station will say their farewells and splitup Tuesday when the crew of the shuttle Endeavour undocks from the orbitinglaboratory.

Endeavour?sseven-astronaut crew is due to cast off from the space station at 1:26 p.m. EDT(1726 GMT), marking an end to nearly a week and a half of constructionwork alongside the outpost?s six residents.

"It has been a spectacular and successful docked phase, but all good things must come to an end," Mission Control told Endeavour's crew in a morning message.

The jointcrew has been the highest population ever for the station and the largest singlegathering in space by humans in history. All 13 astronauts, who represent each of thefive major international partners building the station, plan to hold abrief farewell ceremony at about 10:23 a.m. EDT (1423 GMT).

Aside froma brokentoilet and air-scrubbing device, both of which were repaired smoothly,Endeavour?s mission to the station has gone smoothly, Ridings said.

The shuttlelaunched toward the space station July 15 on a marathon 16-day mission to theorbiting laboratory.

Built bythe Japan Aerospace Exploration Agency (JAXA), the $1billion Kibo is made up of three segments: the new porch, a giantlaboratory the size of a tour bus, and a smaller storage attic, each of whichhad to be launched to the station separately on NASA shuttle flights over the lasttwo years. Astronauts put the final touches on the Kibo lab during their fifthand final spacewalk on Monday.

?I canverify that, from up close, it is indeed a beautiful laboratory,? Endeavourastronaut Tom Marshburn told JAXA astronaut Akihiko Hoshide in Mission ControlMonday after completing work on the Kibo lab.

Endeavourwill return Japanese astronaut Koichi Wakata back to Earth when it lands inFlorida on Friday.

Wakata,JAXA?s first long-term resident of the space station, arrived at the outpost inMarch and watched over his country?s Kibo lab during his 4 1/2 months aboard. Hewas replaced by NASA astronaut Tim Kopra, who launched toward the station onEndeavour to begin his own two-month mission.

Before departingthe space station for good, Endeavour will fly around the orbital laboratory ina sort of victory lap. Shuttle pilot Doug Hurley will be at Endeavour?s helmduring the maneuver while his crewmates snap photographs of the outpost?s newlook with its brand new porch.

?It?s allbeen one big highlight,? Hurley said of the mission this week. ?But for everypilot, to get to fly the space shuttle and get to do the big fly-around?it?s goingto be a big thrill.?