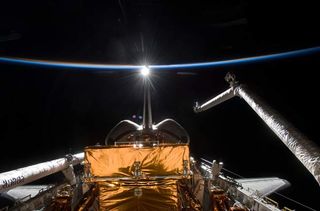 Backdropped by the blackness of space and the thin line of Earth's atmosphere, the space shuttle Atlantis' cargo bay, robotic arm, tail and orbital maneuvering system (OMS) pods are caught in this snapshot by an STS-125 astronaut on May 20, 2009 during a Hubble Space Telescope overhaul.
(Image: © NASA.)

A glitchwith one of the key instruments ? an imaging spectrograph ? aboard the HubbleSpace Telescope continues to plague the 19-year-old spacecraft after attempts lastweek to fix the problem, NASA said today.

Mission managers regrouped today to decidewhat their next steps should be to fix the anomaly with the Space TelescopeImaging Spectrograph (STIS) that caused the Hubble team to suspend theinstrument's operations July 6.

STIS is a super-sensitivespectrograph that can detect faint light from distant developing galaxies.

The teammade an attempt to fully recover the instrument on July 10, but was unsuccessful.The team collected diagnostic information on the problem and met today toreview the status of STIS.

The teamwill meet again later in the week to determine the next course of action. Mission controllers are unsure how long it will take to get STIS back into science-readymode.

"We'renot going to turn it fully operational until we know [more about theproblem]," Ruitberg said, though he's optimistic the instrument will fullyrecover.

While theglitch has delayed the preparation of STIS for science operations, "itdoesn't affect the other instruments," Ruitberg said.

The STISglitch came a few weeks after a separate glitch that froze the observatory'snew data handling unit, installed by shuttle astronauts in May during the fifthand finalservicing mission of the telescope. That glitch was resolvedin mid-June.?

On ahappier note, a third glitch, with one of Hubble's cameras, was resolved lastweek.

?Hubble'sAdvanced Camera for Surveys (ACS) suspended operations on June 24 after theinstrument's flight software detected a problem in its new electronics box. Mission controllers were able to revive the camera on July 6.

"Webasically just had to re-initialize the instrument and it came back up andrunning," Ruitberg said.

ACS hasfinished its Servicing Mission Observatory Verification, or SMOV program, andis ready to do science, though there's still a chance that the glitch couldoccur again. The team is working on mitigation strategies in case that happens,Ruitberg said.

ACS hasbeen on Hubble since its launch in 1990 and was revived by the shuttleastronauts during their 13-day service call.