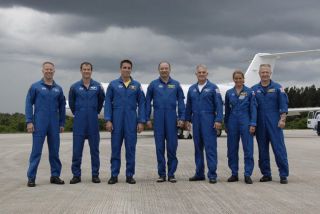 After weeksof repair work to plug a hydrogen leak on the space shuttle Endeavour, NASA isnow watching the weather for the spacecraft?s planned Saturday launch.

Endeavourhas a 40 percent chance of good weather for its weekendlaunch toward the International Space Station, though NASA is hopeful thatthe potential for nearby thunderstorms and thick clouds will not hinder themuch-delayed construction flight.

?That isalways the remaining issue that we have,? NASA test director Steve Payne saidof the weather in a Thursday briefing. ?If there?s a hole in the clouds, we?ll gofor it. If not, then we?ll go for it the next day. But we would rather get itdone on Saturday.?

Endeavourand a seven-astronautcrew are currently slated to blast off Saturday evening at 7:39 p.m. EDT(2339 GMT) from a seaside launch pad at NASA?s Kennedy Space Center in CapeCanaveral, Fla. The countdown clock began ticking down toward liftoff lateWednesday night.

Payne saidNASA has launched space shuttles with a 40 percent chance of good weather inthe past. The forecast will improve slightly on Sunday, though a recent trendof afternoon thunderstorms is expected to continue.

?On launchday we are expecting thunderstorms to affect the countdown, especially in theafternoon,? shuttle weather officer Todd McNamara said.

Endeavour?smission has been delayed since mid-June due a hydrogengas leak that prevented two consecutive launch attempts. Engineers replaceda misaligned connector plate and a vent line seal to plug the leak.

Commandedby veteran spaceflyer Mark Polansky, Endeavour?s six-man, one-woman crew isslated to fly a marathon 16-day mission to the International Space Station. Theastronauts will ferry a new member of the station?s six-man crew to the outpostand deliver a porch-likeexperiment platform - the last piece of Japan?s massive Kibo lab - as wellas other spare parts. Five spacewalks are planned for the mission.

Also launchingon Endeavour are new solar array batteries, as well as a spare antenna, acooling system pump module and a drive unit for the station?s railcar, saidScott Higginbotham, NASA?s payload manager. They will be attached to storageplatforms outside the station during the mission?s spacewalks, he added.