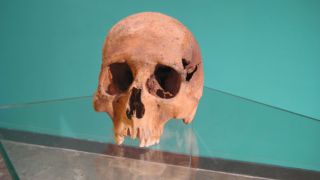 A new DNAanalysis of hairs found in a book that once belonged to Copernicus shows a matchwith the great astronomer?s putative remains, seemingly confirming theiridentity.

Nicolaus Copernicus,a Polish mathematician, astronomer and Catholic cleric (among many otherpursuits), developed a heliocentric model of thesolar system, opposing the widespread belief that the Earth was the centerof theuniverse.

The remainsthought to belong to Copernicus (1473-1543) were found beneath a cathedral in Frombork, Poland, in 2005.

The bones werefound close to the altar Copernicus was responsible for during his tenure aspriest, and forensic facial reconstructions using the skull look similar toportraits of the man.

A team ofSwedish and Polish researchers sought to more firmly ID the remains bycomparing the DNA of the remains to that in hairs found in a calendar (nowexhibited at the Museum Gustavianum in Uppsala, Sweden) that belonged toCopernicus for much of his life.

"Theanalysis of several hairs resulted in interpretable profiles for four of thehairs. Of these, two of the hairs have the same profile as the putative remainsof Copernicus," said team member Marie Allen of Uppsala University.

The Uppsala researchers also made tests of a tooth as well as bone tissue from the remains.Results of the analysis from the Institute of Forensic Research in Krakow andthe Museum and Institute of Zoology in Warsaw and the Uppsala laboratory wereidentical.

"Althoughthese results points towards the materials being from the same individual,there is a probability of random match," Allen said.

The DNAmaterial in this case was limited and also degraded. Therefore, a so-calledmitochondrial DNA test was performed, but this test is less reliable. (Most DNAis found in the nucleus of a cell, but mitochondria, the energy producers ofthe cell, also carry DNA that is passed down from the mother.) This test iscommonly used in criminal investigations, but only as circumstantial evidenceto strengthen the case.

"TheDNA results should be looked at and evaluated in the light of and together withthe information from other disciplines as the archaeological, anthropologicaland facial reconstruction data," Allen said.

The resultsof the DNA analysis, first announced in November 2008, are detailed in the July6 online issue of the journal Proceedings of the National Academy ofSciences.