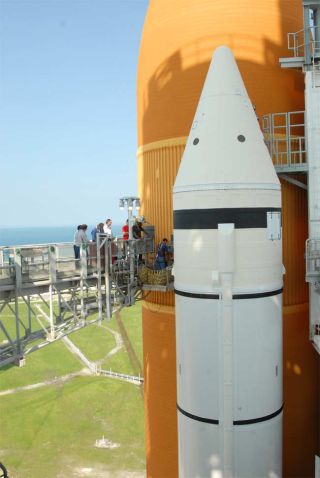 During thetest at the Kennedy Space Center in Florida, NASA loaded Endeavour?s massiveexternal tank with super-chilled liquid hydrogen and liquid oxygen whilewatching a hydrogen gas vent line for excessiveleaks. But after filling the 15-story tank with 526,000 gallons of propellant,no abnormal leaks were detected, boosting confidence that Endeavour willbe ready for a July 11 launch.

?We thinkwe?ve got this licked,? said NASA test director Steve Payne during the fuelingtest. ?This should solve it, and the test we?re doing today is to verify itbefore we go launch next week.?

Thehydrogen gas leak prevented NASA from launching Endeavour during twoconsecutive attempts on June 13 and June 17. After the second try, NASAstood down to study the leak in more detail and allow an unmanned rocket tolaunch a pair of new U.S. moon probes.

Shuttleengineers traced the flammable gas leak to a misaligned plate linking Endeavour?sfuel tank with a Teflon seal and vent line that carries excess hydrogen awayfrom the launch pad. During fueling, a shuttle?s cryogenic liquid hydrogenpropellant boils off over time, so the resulting flammable gas must be ventedto a nearby flame stack to be burned off safely. An excessive leak of hydrogengas at the launch pad could pose an explosion risk during liftoff.

NASA willupdate the public and reporters on the results of today?s test later todayduring a televised briefing at 1:00 p.m. EDT (1700 GMT).

NASAspokesperson Kyle Herring said the test results are encouraging, but a finalinspection of the fuel tank by engineers must be completed first.

?We?vepassed the point where we?ve had problems before, and once you?ve done that youtypically don?t see leaks, historically,? Herring told SPACE.com. ?I?d say we?recautiously optimistic at this point.?

Endeavouris currently slated to launch at 7:39 p.m. EDT (2339 GMT) on July 11 to begin aplanned 16-day mission to the International Space Station. The shuttle?s seven-astronautcrew plans to deliver the last piece of the station?s massiveJapanese lab Kibo, perform five rigorous spacewalks and replace one memberof the outpost?s six-man crew during the marathon spaceflight.

The missionhas until July 14 to launch before NASA would have to stand down until July 27so a previously scheduled unmanned Russian cargo ship can launch and dock atthe space station, mission managers have said.

Whiletoday?s fueling test was performed on Endeavour, another team of engineers isinspecting a flight deck window on the shuttle Atlantis, which flew asuccessful mission to the Hubble Space Telescope in May.

A worklight knob had inadvertentlywedged itself between the window and shuttle dashboard while Atlantis wasin space, forcing engineers on Earth to pressurize the orbiter?s cabin toexpand it slightly in order to remove the part. A team will inspect the windowfor damage to determine if needs repairs or replacement.

Atlantis isslated to launch supplies to the International Space Station on Nov. 12.