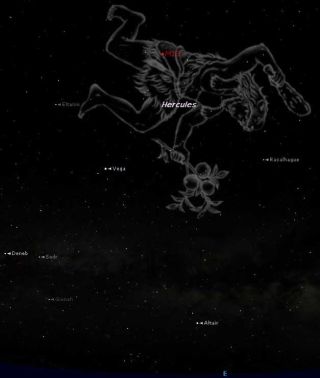 The constellation Hercules and the cluster M13 high in the eastern sky, as seen at around 9 p.m. from mid-northern latitudes this time of year.
(Image: © Starry Night Software)

High in the eastern sky during the late-evening hours is the boisterous ancient Greek hero and unruly demigod Hercules, the strongest man who ever lived.

But as a constellation, Hercules is rather weak and not easy to trace.  The stars are supposed to outline an upside-down man on one knee shooting an arrow, although the traditional mythological figure is difficult for modern skywatchers to visualize.

Yet, primitive men seemed to have no difficulty in picturing these stars as forming the figure of a kneeling man, and the old Arabic name of its brightest star, Ras Algethi, means "The Head of the Kneeler."  About 260 B.C., the Greek poet Aratus noted that "no one knows how to read that sign clearly, nor on what task he is bent."  Yet it was also the Greeks who apparently declared that "The Kneeler" was their great hero.

Though it's not the brightest in the constellation, Ras Algethi is well known because it is one of the brightest of a remarkable class of red supergiant stars which measures hundreds of times as great as the Sun and shines thousands of times as bright.  Its light appears to fluctuate irregularly between third and fourth magnitude.

One of the more famous Hercules stories is how he killed the Hydra.  Perhaps that's why the tail of the constellation Hydra is now slithering out of sight below the southwest horizon.

Four stars, known as the Keystone form the body of Hercules.  A keystone is the stone atop an arch, and has this shape, narrower at one end.

Quite possibly the most celebrated object in the summertime skies is the Great Cluster in Hercules, known also as M13.  Anyone who has visited the summer gathering of amateur astronomers near Springfield, Vermont known as Stellafane, know that this famous cluster is often on display in the observatory that houses the famed Porter turret telescope.

To locate M13, look toward the Keystone.  It's between the two western stars of the keystone that we can find the Great Globular Cluster.  It's about a third of the way along a line drawn from the stars Eta to Zeta.  Actually, it was not Messier, but Sir Edmund Halley (of comet fame), who first mentioned it in 1715, having discovered it the previous year:  "This is but a little Patch," he wrote, "but it shows itself to the naked Eye, when the Sky is serene and the Moon absent."

Located at a distance of about 25,000 light years, the Hercules Cluster has been estimated to be a ball of literally tens of thousands of stars roughly 160 light years in diameter.

Messier first saw the cluster in June 1764 and described it as a "round and brilliant nebula with a brighter center, which I am sure contains no stars."  Today, if you use good binoculars and look toward that spot in the sky where M13 is you likely will see a similar view: a roundish glow or patch of light.  Moving up to a telescope, the view dramatically improves.  With a 4 to 6-inch telescope, the "patch" starts to become resolved into hundreds of tiny pinpoints of light.  In larger instruments, M13 is transformed into a spectacular celestial chrysanthemum.

In his "Celestial Handbook," Robert Burnham describes the view of the cluster in a 12-inch or larger telescope as ". . . an incredibly wonderful sight; the vast swarm of thousands of glittering stars, when seen for the first time or the hundredth, is an absolutely amazing spectacle."