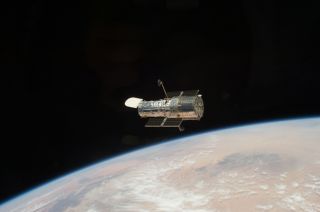 An STS-125 crew member aboard the Space Shuttle Atlantis captured this still image of the Hubble Space Telescope as the two spacecraft continue their relative separation on May 19, 2009.
(Image: © NASA.)

HOUSTON — Atlantis astronauts will prime their spacecraft for a planned Friday landing as they enter the homestretch of NASA's last-ever visit to the Hubble Space Telescope.

Shuttle commander Scott Altman and his seven-astronaut crew will check Atlantis' systems today and convert the spacecraft into a 100-ton glider for landing after giving the 19-year-old Hubble a new lease on life.

"It's hard to believe that we're coming to an end here," Altman radioed Mission Control Wednesday.

The astronauts are nearing the end of an 11-day mission Hubble and received a congratulatory call from U.S. President Barack Obama late Wednesday lauding their work to overhaul the iconic observatory for the last time.

"Like a lot of Americans, I've been watching with amazement the gorgeous images you've been sending back, and the incredible repair mission you've been making in space," President Obama said, adding that the space telescope is an inspiration to the American public. "By allowing Hubble to continue on its journey, you've really allowed all of us to continue on our journey of growth and exploration."

The Atlantis crew is also expected today to testify from space briefing during a NASA budget hearing by Senate Commerce, Justice and Science Appropriations Subcommittee. They are due to discuss their mission with reporters after test firing the shuttle's thrusters and checking its flight control surfaces in a standard systems check.

The shuttle astronauts steamed through a five-spacewalk marathon to outfit Hubble with state-of-the-art instruments and extend its life through at least 2014. It is NASA's fifth, and final, mission to the space telescope before the agency retires its three-shuttle fleet next year.

During their flight, the Atlantis crew added a new wide-field camera and super-sensitive spectrograph, as well as replaced vital gear like batteries, gyroscopes and insulation. They also repaired two long-dead instruments — an advanced camera and older spectrograph — that were never designed to be fixed in space.

They completed their work on Tuesday and released Hubble back into space. They are slated to land tomorrow at 10:01 a.m. EDT (1401 GMT) on a runway at NASA's Kennedy Space Center in Florida.

"We've been training for this flight for a few years now, so I know we're all proud about what we've accomplished," astronaut Megan McArthur told reporters Wednesday. "But we're also looking forward to taking a little break."

NASA is hoping for a break in the weather for the astronauts' Friday return. The Spaceflight Meteorology Group here at NASA's Johnson Space Center has warned that the potential for rains and thunderstorms could delay the shuttle landing.

Mission Control ordered the Atlantis crew to shut down some unneeded systems and backup computers in order to conserve power in case weather keep the astronauts aloft for another day or two. NASA will only target the Kennedy Space Center, Atlantis' home port and launch site, for landing on Friday, but could call up a back up site in California if required.

Today, while the rest of their crewmates prepare Atlantis for re-entry, Altman and shuttle pilot Gregory H. Johnson will use a computer simulator to rehearse their approach and landing. It has been nearly two weeks since they practiced landing Atlantis in a modified NASA aircraft, so the simulator is vital, Altman said.

"This program refreshes us on that and gives us a chance to practice before we put it all on the line on landing day," Altman said. "I think it's a great rehearsal but the proof's going to be in the pudding when we get back, and I'm looking forward to getting her back down soon."