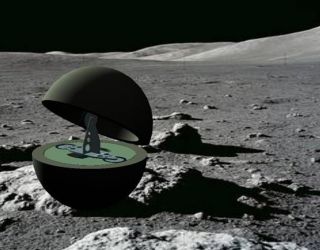 A concept illustration of FREDNET's picorover opening its shell on the moon.
(Image: © Team FREDNET)

Opensource usually applies to virtual space rather than outer space, but TeamFREDNET hopes to apply the concept toward winning the Google Lunar X Prize.

Thegrowing group of netizens hopes to reachthe moon using the mantra ?simple, small, low mass, low budget,? afterstarting from a network of professional friends and the vision of a man namedFred Bourgeois.

?Itwas only natural to fully use the Internet to pull together the team,? saidRich Core, Team FREDNET?s software lead and a longtime friend of Bourgois.

Bourgeoisgrew up in the space business around Huntsville, Alabama and the Jet PropulsionLaboratory in California. There he made friends with people such as Core,who spent a long career working for aerospace giants such as Lockheed-Martinand as a software consultant in Silicon Valley.

Thatinformal network of friends became the basis for Team FREDNET?s talent whenBourgeois saw the Google Lunar X Prizeannouncement that challenged teams to land a robot on the moon, move at least1,640 feet (500 meters) and beam high definition views back to Earth.

Bourgeoise-mailed Core and others with a straightforward proposition — did they want togo to the moon?

?Wehaven't really had to go out and beat the bushes for people,? Core told SPACE.com.?People glommed onto us as the underdog.?

Membersof the online community that form Team FREDNET may never meet in person. Theteam?s three leaders come from three different time zones in the United States,while the head of communications lives in Sweden and the head of the rocketgroup hails from Australia.

Whatgets the team volunteers — ranging from senior aerospace engineers at Boeing tohigh school students — is a shared sense of excitement about a return to themoon. The former may remember the heady daysof Apollo, while the latter see spaceflight as the untapped frontier forentrepreneurs.

Organizingthis far-flung group posed perhaps the biggest and earliest challenge. Opensource software teams can normally download a program and add their owncontributions, but Team FREDNET had to translate its many individual ideas intorocket engines and rover gears.

?Currently it feels like we are operating in[an] organizational vacuum,? wrote a forum member named ATup in April 2008. ?Ourfearless leader FJB, can only be so many places at once, and because of that weseem to be adrift in theory-land.?

Thegroup has since crystallized into three separate teams, including a missionteam and business development team. But it's the Open Source Development Teamthat represents the most visible face of Frednet by showcasing the latest roverconcepts such as two-wheeled Jaluro, the four-wheeled WRV1 and the roly-polyPicorover.

Bourgeoisinitially suggested a rover the size of a cell phone, which other team membersmay see as more a statement of spirit rather than a true engineering goal.

Still,visions of tiny rovers coincide with Team FREDNET aiming to reach the moon on abudget less than $20 million. Winning will require working within thoseself-imposed budget constraints, Core pointed out, even as the team looks todevelop plans and hardware for the future.

?Everythingwe are planning and doing has an element that will continue even after theX-Prize is over,? Core explained.

Theteam has attracted a fair amount of attention because of its online presence,but is still mainly self- and volunteer-funded. Team leaders hope thatFrednet's unique position as an open-source team can hook bigger sponsorswilling to back a nontraditional approach.

"Afterwe succeed, I frankly hope to see another competitor use ouralready-successfully-completed Mission as a template they use to take SecondPrize in the GLXP," Bourgeois said on the team's Website.