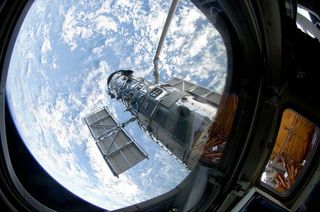 An STS-125 crewmember onboard the space shuttle Atlantis snapped a still photo of the Hubble Space Telescope following grapple of the giant observatory by the shuttle's Canadian-built remote manipulator system on May 13, 2009 during NASA's last mission to the telescope.
(Image: © NASA.)

HOUSTON — Two astronauts in bulky spacesuits will open up the Hubble Space Telescope on Friday in a delicate tune-up to keep the aging observatory pointed straight.

Atlantis spacewalkers Michael Massimino and Michael Good are slated to float outside their shuttle to replace some of Hubble's batteries and all six of its gyroscopes, which are used to accurately point the telescope at cosmic targets. Giving Hubble new gyroscopes is the mission's number one task, mission managers said.

The job sounds mundane, but without the new parts Hubble won't be able to reliably maintain its position in space precisely enough to observe the universe or conserve the power generated by its solar wings, mission managers said.

Today's spacewalk is the second of five consecutive excursions by the crew of Atlantis during NASA's fifth and final mission to overhaul Hubble. On Thursday, a different team of spacewalkers installed a new camera and docking gear on Hubble, and also replaced a malfunctioning computer unit that beams images and data back to Earth.

While Hubble has six gyroscopes, only three are working and the telescope has been operating in a two-gyroscope mode for years in order to keep the last one as a spare. Today's spacewalk will reset Hubble back to full capacity and should help extend its mission life another five years, Burch said.

But it is a far from simple task. To do the job, Massimino will have to squeeze inside a Hubble access door with barely enough room to move and his feet rooted to a foot restraint. He can use his hands to install the new gyroscopes, but could seriously damage fragile nearby sensors if his spacesuit rubs against anything at all, mission managers said.

"We're in a really delicate place inside the telescope," Good told SPACE.com before flight. "So I'm going to breathe a big sigh of relief when we get everything done and close those doors. And even the doors are tricky."

Good will be perched at the tip of Atlantis' robotic arm for most of the spacewalk in order to move the new parts from the shuttle's payload to Hubble.

Astronauts have had trouble closing the gyroscope access doors on Hubble in past spacewalks. Massimino and Good have spent hours just practicing to open and close them, mission managers said.

Hubble's batteries, which have not been changed since the telescope launched in 1990, are also showing signs of age.

"Just like any other battery, the battery in your car, batteries run down over time," said Keith Walyus, Hubble mission operations manager at NASA's Goddard Space Flight Center in Greenbelt, Md. "So we're going to install a new set of batteries, which will give us an extended life of Hubble."

Three of Hubble's six batteries will be replaced in today's spacewalk. The rest are expected to follow in a Monday excursion.