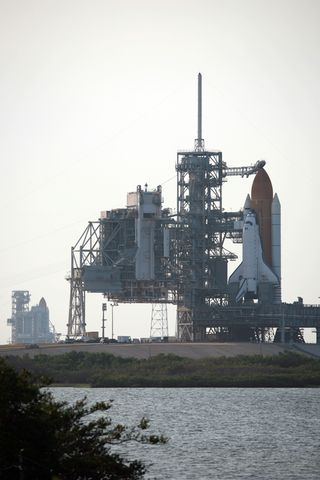 The shuttle Atlantis stands poised for a May 11, 2009 launch toward the Hubble Space Telescope on STS-125. At left in the background is shuttle Endeavour atop a second launch pad primed for a rescue mission.
(Image: © NASA/Dimitri Gerondidakis)

CAPE CANAVERAL, Fla. - After months of delay, the spaceshuttle Atlantis is poised to launch seven astronauts today on a risky missionto breathe new life into the Hubble Space Telescope.

The stakes are high. Hubble is 19 years old with two brokencameras and a host of other systems in need of replacement or upgrades. Atlantisis poised to fly the fifth and final mission to overhaul the iconicspace telescope.

?Particularly on this mission, the final mission, we'regoing for broke,? said David Leckrone, senior project scientist for Hubble.?We?ve set the bar extraordinarily high for ourselves.?

NASA expects near-perfect weather to launch Atlantis at 2:01p.m. EDT (1801 GMT) from its seaside launch pad here at NASA?s Kennedy SpaceCenter. The mission carries a price tag of $1.1 billion. NASA and the EuropeanSpace Agency have spent $10 billion on Hubble since the orbiting observatory?sconception and launch in 1990.

?We?re ready to go give Hubble a hug,? said veteranHubble repairman John Grunsfeld, an astrophysicist-turned-astronaut makinghis third trip to the space telescope. ?I hope Hubble?s ready for us.?

If all goes well, the astronauts will leave Hubble?s visionand science capability more powerful than ever before by the end of the 11-daymission. Atlantis is also carrying a set of IMAX 3-D cameras to documentHubble?s last service call for a film slated to be released in spring 2010.

The mission carries extra risks, however.

The risk to reach Hubble

Hubble is beyond the reach of the International SpaceStation, where astronauts would otherwise be able to take shelter for months iftheir shuttle were damaged beyond repair. The observatory flies 350 miles (563km) above Earth in a much different orbit than the space station, at 220 miles(354 km) high.

The mission also has a higher chance being hit by space junkor orbital debris. While at Hubble, there?s a 1-in-229 chance Atlantis could beseriously damaged by space trash. The astronauts will position the shuttlespecial orientations to reduce that risk and fly down to a safer, cleaner orbitsoon after returning Hubble space near the mission?s end.

NASA actually canceled the mission in 2004 because of thatrisk and the Columbia shuttle tragedy that killed seven astronauts in 2003. TheHubble mission was resurrected in 2006 after NASA successfully resumed shuttleflights and tested heat shield inspection and repair techniques.

In case something goes wrong, NASA has primed a second spaceship- the shuttle Endeavour - to flya rescue mission, if needed, to retrieve the Hubble-bound astronautsbefore their air runs out - 25 days is all they carry on Atlantis. But NASAbelieves the likelihood of actually needing the rescue flight to be extremelyremote, and each of the Atlantis astronauts say they?re willing to take therisk to save Hubble.

Hubble has made an amazing contribution to science and ourunderstanding of the universe, said veteran shuttle commander ScottAltman. But while it has shed new light on the expansion of the universe, theevolution of galaxies and the formation supermassive black holes, it is alsothe vicarious eye through which people all over the world seethe cosmos.

?We can?t travel 13 1/2 billion light-years,? Altman said. ?Butwhen Hubble brings that to us, it?s like we?re there.?

Launching with Grunsfeld are Altman, pilot Gregory C.Johnson, and mission specialists Megan McArthur, Michael Good, MichaelMassimino and Andrew Feustel. Altman, Grunsfeld and Massimino have flown toHubble before. The rest of the astronauts are making their first spaceflight.

The astronauts plan to perform a five back-to-backspacewalks to install two new cameras and attempt to repair the two ailinginstruments, which were never designed to be fixed in space. They also willattempt some basic upgrades, like replacing broken gyroscopes and old batteries.

Hubble is designed to be overhauled every three years, butthe space telescope hasn?t seen an astronaut service crew since 2002. Much ofthat gap stemmed from the Columbia accident, but the most recent delay ? aseven-month slip ? occurred last fall when a part aboard Hubble unexpectedlybroke down.

Because of the gap, Hubble needs a major overhaul.

?You can imagine if you had a car and you were driving everyday for seven years and never took it into the shop, you?d have quite a longlist of things to do,? said Preston Burch, Hubble project manager at NASA?sGoddard Space Flight Center in Greenbelt, Md.

NASA has three chances to launch Atlantis this week beforethe agency must stand down due to a military operation based out of the nearbyCape Canaveral Air Force Station. If the shuttle does not launch by Wednesday,NASA would wait until May 22 to wait out the military?s operation and rechargethe new batteries for Hubble.

But just being poised for launch after years of delay - withpristine weather expected - has given Hubble scientists cause to celebrate. ????????

?To be within one day of it is remarkable and unbelievable,and I have to persuade myself I'm not dreaming,? Leckrone said, adding thatwith prediction of clear weather he?s confident Atlantis will launch today. ?Itis going to go splendidly, I can feel it.?