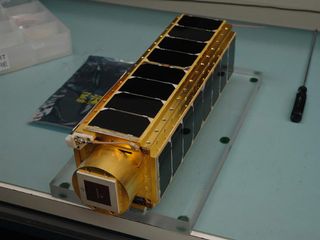 The PharmaSat satellite payload sits fully assembled, covered in shiny solar panels. It is scheduled for launch aboard a U.S. Air Force four-stage Minotaur 1 rocket on the evening of May 5, 2009.
(Image: © NASA/ARC/Christopher Beasley)

A small satellite the size of a bread loaf could helpscientists figure out how drugs work in space.

The nanosatellite, called PharmaSat, weighs 10 poundsand is designed to study how yeast responds to antifungal drugs while circlingthe Earth at 17,000 mph.

"PharmaSat is an important experiment that willyield new information about the susceptibility of microbes to antibiotics inthe space environment," said David Niesel, PharmaSat's co-investigator atthe University of Texas in Galveston.

PharmaSat is slatedfor launch aboard a U.S. Air Force Minotaur1 rocket on the evening of May 5, as a secondary payload. The rocketcarries a TacSat 3 satellite as its primary payload.

Weather permitting, the launch might offer a remarkablesight to many residents along the East Coast.

The satellite holds a micro-laboratory packed withsensors that can detect the growth, density and health of yeast cells.Scientists plan to use three different doses of the antifungal treatment andsee how the yeast responds over the course of 96 hours.

NASA spaceflight engineers could contact the satellite assoon as one hour after launch and send a command to start the yeast experiment.The satellite would then send data back to Earth in near real-time for as longas six months, if all goes well.

Previous nanosatellite missions include GeneSat-1, a shoebox-sizedsatellite that launched in December 2006 and tested how well E. colibacteria thrived in space.

Santa Clara University has extended an invitation to hamradio operators around the world to tune in and hear the satellite's broadcast.