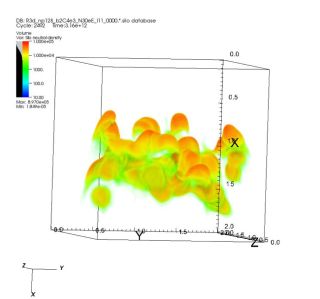 A 3D image of gas formations similar to the Eagle Nebula's "pillars of creation, from computer simulations done at the Dublin Institute for Advanced Studies in Ireland. This particular model shows gas structures after 100,000 years of formation.
(Image: © A. Lim/J. Mackey/DIAS)

The origin of the majestic "pillars of creation,"one of the most familiar and colorful scenes in space, is a bit of a mystery.Now researchers say it might have started from gaseous clumps pushed intoshadowed areas by radiation from nearby stars.

Such clumps of gas creep toward darker regions of gas anddust and createdense knots, according to new simulations. The shadows around the knots thenscreen out the intense ultraviolet radiation that might interfere with furthergas formation, the model indicates.

"There is, as yet, no clear consensus in theliterature regarding the formation of the pillars, except that it is mostlikely related to photo-ionization processes due to nearbymassive stars," said Andrew Lim, an astrophysics researcher at the DublinInstitute for Advanced Studies in Ireland.

Photo-ionization or photo-evaporation occurs when intenseradiation from stars energizes neutral gas clouds to create a hot outer layerof ionized gas. The hot gas then expands rapidly like an explosion and sendsshockwaves outward into any nearby clumps, Lim explained.

The process could explain how the pillars of creationpiled up in the iconicimages of the Eagle Nebula, located about 7,000 light-years away and firstspotted by NASA's Hubble Space Telescope in 1995. A light-year is the distancelight travels in a year, or roughly 6 trillion miles (10 trillion kilometers).

"We have been able to produce [virtual] pillarswhich are roughly consistent with the sizes and lifetimes which are inferredfrom observations," Lim told SPACE.com.

Earlier research looked only at how lone gas clumps mightlead to pillar creation. The shadow effect represents one of the prime suspectsbehind the creation process, although gas instability from the radiationbombardment might also contribute.

Perhaps the most surprising result from the newsimulations is that the largest clumps don't necessarily serve as foundationsfor the pillar-like structures, Lim noted.

But another interesting effect came from modeling a"point source" of radiation, such as a star — the photo-ionizationeffect of the radiation bombardment had a stronger influence on gaseous knobsthat could potentially grow into pillars, because of knobs having a largersurface area than just a flat surface.

"In this way the radiation field tends to 'hammerthe nail that sticks out,' making it more difficult to form a pillar," Limsaid. That again suggests the importance of the shadow effect shielding thenewborn pillars.

Lim and his colleagues used 2-D and 3-D computer modelsto test different scenarios with many different sizes and configurations of gasclumps. They next plan to study the effects of magnetic fields andgravitational effects on the pillars of creation.

In the real universe, the Eagle Nebula's pillars may havealready been knockeddown by a giant supernova explosion, according to a previous study. But thepillars will appear intact to Earth observers for another 1,000 years andperhaps permit further study, because the light we see now left the scene longago.

The current simulation results were to be presented thisweek at the European Week of Astronomy and Space Science at the University ofHertfordshire, UK.