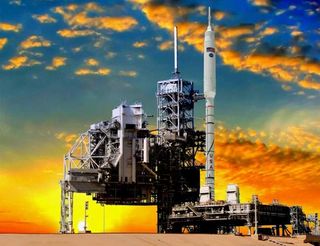 The pieces are coming together for the first test flight ofNASA?s new rocket, Ares I, scheduled to lift off this summer.

The rocket prototype, called Ares I-X, is scheduled to blastoff from NASA's Kennedy Space Center in Cape Canaveral, Fla. The flight will beunmanned, and will only include a partial first stage of the rocket, whichshould lift the vehicle and mockups of its upper stage to about 25 miles (40.2km) in roughly two minutes.

The test is a critical first try of the new Ares I rocketfor the OrionCrew Exploration Vehicle, which NASA hopes will replace the space shuttle asAmerica's preeminentspaceship. Ares I is designed to carry astronauts in the capsule-shapedOrion vehicle that will sit atop the rocket. NASA aims to send crews aboardOrion to the International Space Station by 2015, to the moon around 2020 andultimately beyond.

Ares I is being built as part of NASA's ProjectConstellation, which will also include a larger sister rocket, Ares V,designed to carry heavy cargo instead of people.

"This launch will tell us what we got right and what wegot wrong in the design and analysis phase," said Jonathan Cruz, deputyproject manager for Ares I-X Crew Module/Launch Abort System. "We have alot of confidence, but we need those two minutes of flight data before NASA cancontinue to the next phase of rocket development."

Slated for late July or early August, the upcoming Ares I-X demonstrationlaunch will test whether the bottom section of the rocket, called the firststage, burns as planned, as well as whether it can separate from a dummy upperstage and fall back to Earth safely withparachutes.

Engineers on the ground will monitor the flight closelythrough sensors attached all over the rocket to see if the overall vehicledesign is safe and stable.

The sensors measure aerodynamic pressure and temperature atthe top of the rocket to study how it slices through the atmosphere,determining the flow of air over the entire vehicle.

"The team?s been working many years to get to thispoint," said Jon Cowart, Kennedy?s deputy mission manager for Ares I-X."When you get the last of the hardware here, it really energizes the folksand they begin to think this thing really could happen. It becomes that muchmore real."

Since arriving at the Cape, the Ares I-X segments are beingstacked inside the giant Vehicle Assembly Building. The dummy upper stages,which are packed with weights to simulate the real thing, will be bolted ontothe top. When complete, the rocket will stand higher than 320 feet.

The launcher is planned to lift off from Kennedy's LaunchPad 39B, which has also been used to launch both space shuttles and the SaturnV rockets that carried Apollo capsules.

On March 25, the Mobile Launcher Platform-1, which is usedto assemble vehicles and transport them to their launch pads, was handed overfrom the shuttle program to Constellation. The 4,625-ton, two-story steel structureis now being repurposed for the Ares I-Xlaunch.

"It truly is a historic day to be turning over a majorpiece of hardware from one manned spaceflight program to another," ShuttleLaunch Director Mike Leinbach said. "It really doesn?t happen veryoften."

The launcher platform has previously been used for bothshuttle and Apollo flights, including the launch of Apollo 11, which first tookhumans to the moon. It is planned to retire after this summer's test flight,having served three different space programs.