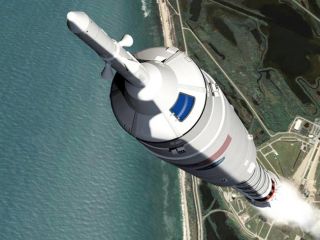 NASAhas been targeting a late-spring launch out of Florida's Kennedy Space Center(KSC) of Ares 1-X, an early prototype of the Ares 1crew launch vehicle the agency intends to field in 2015. The Ares 1, derivedfrom the space shuttle solid-rocket motors, will be used to loft NASA's plannedCrew Exploration Vehicle into space.

Butbefore NASA can move ahead with the Ares 1-X flight, the agency first needs tomake some permanent modifications to a space shuttle launch pad that mustremain unchanged until after the Hubblerepair mission.

"Weare all going through schedule assessments especially now with the Hubbledelay," Scott said. "I do expect to have a new schedule coming out ofthat and then I believe schedules will be adjusted at that point."

Althoughsenior NASA officials told reporters prior to the Hubble setback that the Ares1-X flight likely would not launch before summer, the Ares 1 program and itscontractors have continued to target an April 15 launch date.

Scottsaid a mid-April launch is no longer possible.

"Notwith the Hubble delays we have. We would not be able to meet an April 15date," she said.

SpaceShuttle Atlantis was positioned on Launch Complex Pad 39A with a full load ofspare parts awaiting its scheduled Oct. 14 launch toward Hubble when the18-year-old space telescope experienced an onboard computer failure Sept. 27.The glitch was serious enough that NASA wasted little time announcing that themission would have to be put off for several months.

NASAmade the call while a second space shuttle orbiter, Endeavour, was perched atopneighboring Pad 39B being readied for a so-called launch-on-need rescue missionagency officials hope will not be necessary. NASA rules require that forshuttle missions to destinations other than the international space station, asecond orbiter must be ready to launch on a rescue mission should something gowrong with the first.

Hadthe Hubble repair mission lifted off in mid-October as planned, ground crewswould have gotten to work almost immediately washing down Atlantis' MobileLaunch Platform and preparing the giant tracked vehicle for a number ofmodifications needed to support the Ares 1-X flight. Meanwhile, once it wasclear that Endeavour would not be needed to rescue a stranded Hubble-repaircrew, that orbiter would be moved to Pad 39A for a mid-November launch to thespace station. The Mobile Launch Platform used for Atlantis' liftoff then wouldbe rolled out to Pad 39B where it would undergo a planned 10 weeks worth ofmodifications.

Groundcrews also would begin installation of a command, communications and controlsystem and swap out some interfaces between the pad and launch platform, allwhile continuing to erect a new lightning tower tall enough to protect theroughly 95-meter-tall rocket during the thunderstorms prevalent along theFlorida coast during warmer months.

Scottsaid work on the lightning tower would not be affected by the Hubble delay. Shealso said a number of key changes planned for the pad were not due to get underway until January or February.

"We'restill in design phase so a lot of the [equipment] like the vehiclestabilization system ... aren't slated to come here until April and that willnot be affected by Hubble," she said.

Scottsaid it was too early to determine how much Ares 1-X would be delayed as a resultof Hubble's problems. The Ares program, she said, cannot replan the Ares 1-Xwork until the space shuttle program nails down a new schedule for the Hubblerepair mission.

However,Scott said she is hopeful that Hubble's delay will not result in a month-for-monthslip for Ares 1-X.

"Becausethat's what KSC does best — they will go and reprioritize and reprogram to seehow they can still meet the earliest date. That's what we do here all thetime," she said.

Meanwhile,Ares 1-X flight hardware is starting to ship from various points around the United States. NASA's Cleveland-based Glenn Research Center, for example, has finishedconstruction of an Ares 1-X dummy upper stage and plans to ship that hardwareout before the end of October.

Glennspokeswoman Katherine Martin said a media event is planned for Oct. 22 at the Ohio River port where the dummy rocket stage will begin its journey down to KSC aboard theDelta Mariner, the same vessel that carries Delta 4 rocket stages too big totravel over land.

Scottsaid having the bulk of the rocket and new ground support hardware on handbefore pad modifications begin in earnest actually could permit KSC to workmore efficiently than otherwise might have been possible. This could keep afive-month delay in handover of Pad 39B from translating into a five-monthdelay in the launch of Ares 1-X.

"Hardwaredeliveries will be at more opportune times within the schedule so we can domore parallel work now than we could have," she said. "They probablywill be doing more work in parallel so they may be able to shorten the delay soit may not be the same five-month delay."