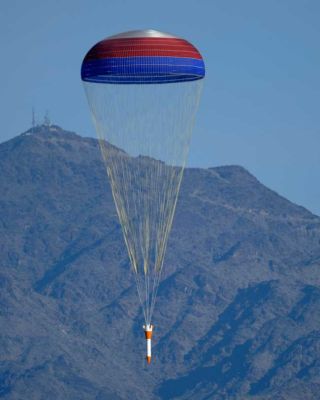 NASA and the U.S. Air Force managed to drop a 50,000-pound rocket booster on the Arizona desert. Well, it was a sort of a crash test dummy. But the 25-ton heft was real.

As hoped, a parachute opened and the booster set down intact.

The drop was a test of the next-generation rocket called Ares, designed to get the space agency, and some astronauts, back to the moon.

"NASA's new Ares moon rocket is going to have a reusable booster stage that we plan to recover after each mission," explains James Burnum of Marshall Space Flight Center. "To 'catch' the booster before it crashes back to Earth, we need a super-reliable parachute system."

Dropping something so big is not simple. In fact it doesn't always go well. Last year, a mock-up of NASA's Orion space shuttle successor twisted, tumbled and fell from thousands of feet up after a parachute failed to inflate properly.

The recent test, conducted Feb. 28 near Yuma, went off without any disasters, according to a NASA statement today.

"We flew at 175 knots at 25,000 feet, and dropped one of the heaviest payloads a C-17 has ever carried – a 50,000-pound stand-in for the spent Ares booster," said chief pilot Frank Batteas of NASA's Dryden Flight Research Center. "A lot of things have to happen correctly for such a test to be successful."

The Ares booster recovery parachute system consists of a small pilot chute, which pulls out the drogue chute, and three main parachutes.

The 68-foot diameter drogue parachute showed its up to the ultimate task: to slow the Ares I rocket's jettisoned booster and orient it vertically before the cluster of three main parachutes deploys to carry the booster to splashdown.

"The steel 'missile' used for testing has cavities for adjusting the weight of the payload," said Franz Ravelo, C-17 Mission Systems Engineer at the Air Force Flight Test Center in Edwards Air Force Base, California. "We'll reuse it for future Ares parachute testing with 70,000, 77,000, 85,000, and finally 90,000-pound payloads."