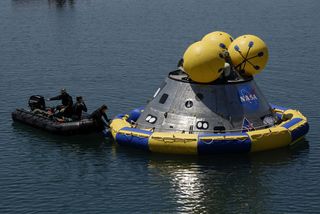 CAPE CANAVERAL AIR FORCESTATION - In a test reminiscent of the Apollo days, pararescue jumpers inwetsuits attached inflatable rings around a mockup of NASA's next spacecraft.

In the first splashdown testWednesday for NASA's Orion Crew Exploration Vehicle, airmen from the Air Force920th Rescue Wing at Patrick Air Force Base practiced stabilizing the capsulein the water.

The buoyancy of the Orionhad alreadybeen tested in a pool. For the recent test, a crane lowered the capsuleinto the calm waters of the Trident Basin at Cape Canaveral Air Force Station.

"Our next step is totake it out to sea," said Michael Generale, NASA test director.

The 15-foot diameter crewmodule will replace the space shuttle after it is retired in 2010, or soonafter. The Orion is expected to carry Americans back to the moon.

The pararescue jumpers alsoattached three yellow inflatable spheres to the capsule. During a realsplashdown, Generale said spheres on Orion would inflate and flip the conicalcapsule upright.

"It's not been donesince the Apollo days," Generale said after the test.

The pararescue jumpers,called PJs, tested 18-inch and 24-inch diameter collars by attaching themaround the lower section of the crew capsule as it floated in the basin, whereit had been towed behind a boat. The PJs used an inflatable boat to positionthe collars around the capsule.

"They are testingthings that will become part of the training manual," Air Force Tech Sgt.Paul Flipse, a spokesman for the 920th Rescue Wing, said.

Orion is part of the ConstellationProgram's fleet of vehicles. It combines Apollo spacecraft and shuttlebooster technology to create the new space exploration system.

"PJs used to do thisback in the Apollo days," Master Sgt. Chris Seinkner, who participated inthe test, said. "This is kind of nostalgic for us."

The Orion crew capsule soonwill be tested at sea in increasingly rough water. Seats and other componentswill be added for other trials. Generale said Wednesday's effort was just thestart of testing.