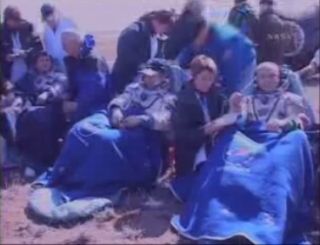 Americanspace tourist Charles Simonyi and the station?s returning Expedition 18 crewtouched down on the Central Asian steppes of Kazakhstan at 3:16 a.m. EDT (0716GMT), their Soyuz TMA-13 spacecraft parachuting to a pinpoint landing.

The flawlesslanding marked the end of a smooth flight for Simonyi, the world?sfirst repeat space tourist, who returned to Earth alongside the station?sExpedition 18 commander Michael Fincke of NASA and Russian flight engineer YuryLonchakov. It was early afternoon Local Time at their landing site.

?It was agreat trip, thank you everyone,? Simonyi, 60, said just before leaving thespace station late Tuesday. ?I?m looking forward to get home to my wife, but itwas a fantastic trip.?

Simonyi andthe Expedition 18 crew were promptly greeted by swarms of recovery workers, whohad watched from nearby helicopters as the Soyuz floated down under parachutesand landed. All three spaceflyers were swiftly helped out of their spacecraft andwere reported to be in good health after returning to Earth and feeling the tugof gravity once more.

Simonyipaid about $35 million for a 13-day trip to the space station under a dealbetween Russia?s Federal Space Agency and the Virginia-based firm Space Adventures,which is currently the only firm arranging orbital spaceflights for privatecitizens. It was Simonyi?s second spaceflight. He last visited the spacestation in 2007 under a similar deal that cost more than $20 million at thetime.

?It was adifficult decision for me to fly for the second time and now looking back, I'mso glad that I've done it,? Simonyi said before leaving, adding that he wasable to performtwice as much science, photography and educational events than he did thefirst time.

Simonyilaunched to the station on March 26 with the outpost?s newExpedition 19 crew - veteran cosmonaut commander Gennady Padalka and NASAastronaut Michael Barratt - which replaced Fincke and Lonchakov. A third memberof Expedition 19, Japanese astronaut Koichi Wakata, was already aboard theoutpost when the new crew members arrived.

?From whereI stand, I think humanity has got a wonderful space station in theInternational Space Station,? Simonyi said, lauding the outpost?s professionalcrews and ground support. ?Maybe the only thing that is more remarkable thanthe size and the effectiveness of this space vehicle is the people serving onboard.?

Simonyi?sflight was the seventh private flight arranged by Space Adventures and may bethe last for some time due to a lack of available Soyuz seats. But the companyis hopeful it will be able to offer seats to paying customers, possibly asearly as late September.

Wednesday?sSoyuz landing was delayed one day due to soggy ground conditions at thespacecraft?s first drop zone, which forced Russian flight controllers to shiftto a more suitable area southeast of the initial site near the Kazakh city ofDzhezkazgan.

BeforeSimonyi and the Expedition 18 crew returned to Earth, they bid a fond farewellto the space station?s new Expedition 19 crew. Their Soyuz spacecraft undockedfrom the station late Tuesday at 11:55 p.m. EDT (0355 GMT) as both spacecraftflew 220 miles (354 km) above eastern Russia.

Fincke saidit was the ?coolest thing? in his life to work with NASA and its partners inRussia, Europe, Japan and Canada to build the International Space Station overthe last six months, his second tour at the outpost. During that time, he andLonchakov performed two spacewalks, hosted two visiting NASA space shuttles thatboosted the space station to full power and primed it tosupport larger, six-person crews later this year.

?We doeverything together. We're humanity's bright hope for the future,? Fincke said ofthe entire space station effort. ?So we?re handing over station with all that.The pressure?s on guys!?

?Grouphug!? one of the astronauts said with a laugh as all six spaceflyers shared afarewell embrace.

?Welcomeback to gravity!? someone told Fincke.

The worldrecord for the most cumulative time in space is held by Russian cosmonautSergei Krikalev, who has 803 days in orbit during six spaceflights.