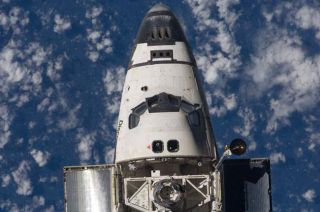 An overhead close-up view of the exterior of shuttle Discovery's crew cabin, part of its payload bay and docking system was provided by Expedition 18 crewmembers on the International Space Station on March 17, 2009 during the STS-119 mission.

Spaceshuttle Discovery and its crew of seven astronauts are poised to come hometoday after a nearly two-week flight that boosted the International SpaceStation to full power by adding the outpost?s final pair of solar wings.

Discoveryis slated to land at NASA?s Kennedy Space Center in Florida at 1:39 p.m. EDT(1739 GMT) to complete a 13-day flight to the space station. Favorable weatherconditions are expected at the shuttle?s Cape Canaveral, Fla., runway were the100-ton spacecraft is expected to glide in for a landing.

Archambaultand his crew spent eight days docked at the space station, where they performedthree spacewalks to install the newexpansive solar arrays - the outpost?s fourth and final set - and unfurlthem to their 240-foot (72-meter) wingspan.

The shuttleastronauts left the space station on Wednesday to clear the way for a new crewand space tourist Charles Simonyi, who launchedtoward the orbiting lab a day later aboard a Russian Soyuz spacecraft. TheSoyuz is due to dock at the station at 9:14 a.m. EDT (1314 GMT) today.

?This isthe calm before the storm,? station commander Michael Fincke told MissionControl Friday. ?The hurricane is coming, the next crew?s on its way.?

The $298 millionsolar arrays delivered by Discovery balanced out the space station?s look, giving it eight wings total(two per side), and increased its power grid by 25 percent. They also completedits backbone-like main truss, which is now longer than a football field inlength.

With allfour arrays in place, the station is designed to generate enough electricity tofeed a neighborhood of 42 average size homes, power that is vitally needed ifthe station is to double its crew size to six later this year and increase itsscience output. The shuttle crew also helped repair the space station?s waterrecycling system, which converts astronaut urine and sweat back into puredrinking water to support larger crews.

?Deployingthe solar arrays was one of the high points of this flight,? mission specialistJohn Phillips told students in Hawaii Thursday. ?We?re all really proud tobring that extra power to the station.?

Phillipsand his crewmates were speaking with students from Punahou School in Honolulu, President Barack Obama's high school alma mater,just days after receiving a phonecall from the president himself praising their mission.

Set toreturn to Earth aboard Discovery with Archambault and Phillips are shuttlepilot Dominic ?Tony? Antonelli and mission specialists Joseph Acaba, StevenSwanson, Richard Arnold II and Sandra Magnus. Acaba and Arnold are formerschoolteachers and making their first spaceflight along with Antonelli.

?It was alot of fun on the space station,? Magnus told Mission Control this week. ?Atruly unique adventure.?

Magnus toldreporters she will miss the views from space - especially the colors of thewaters around the Caribbean - but is looking forward to being outside for thefirst time in months, and perhaps a chocolate milkshake, some sushi and acheesy pizza.

About fivemonths? worth of experiment samples, including blood, biological samples in afreezer and cold storage bags, as well as four of five liters of recycled waterfrom the station?s urine recycler, are also packed aboard Discovery.

?I?mlooking forward to flying this thing for real,? he told reporters beforeflight. ?You don?t have any engines. It is a 200,000-pound glider and you?vegot one chance to do it right.?

The shuttleactually has two chances to land today at the Kennedy Space Center. If weatherdoes not cooperate for the first window, the shuttle can skip that one and try again at 3:13 p.m.EDT (1913 GMT).

Shuttleentry flight director Richard Jones told reporters Friday that he intends toonly aim for a Florida landing today and, if needed, on Sunday because offavorable weather. NASA typically prefers to land shuttles at the Floridaspaceport to avoid the extra time and cost of ferrying orbiters from a backuprunway in California. Discovery has enough supplies to stay in space untilTuesday, he added.

Jones saidshuttle engineers will be watching Discovery?s landing extra closely today becauseof aspecial heat-resistant tile attached to its underbelly near the rear of itsleft wing. The tile has a slight ?speed bump? to disturb the hypersonic flow of3,000 degree Fahrenheit (1,649-Celsius) gases around Discovery while it fliesat Mach 15 during landing. Nearby sensors will measure any temperatureincreases from the bump.

The tile ispart of an experiment to that may aid heat shield design for NASA?s new Orionspacecraft and poses no risk to Discovery and its crew, the agency has said. ANavy plane will fly beneath Discovery during its approach to observe it with along-range infrared camera.

Jones saideverything was in place for both the experiment and the shuttle?s landing. ?

?Thevehicle is healthy and the crew is ready to come home,? Jones said.