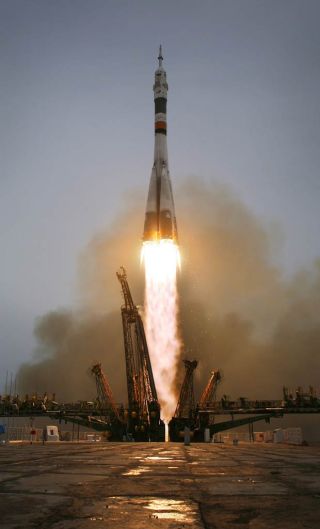 A new station crew and space tourist are closing in on theInternational Space Station (ISS) and due to catch up with the orbiting labSaturday after launching two days earlier.

Padalka and Barratt will replace the space station?s currentcore crew, Expedition 18 commander Michael Fincke of NASA and flight engineerYury Lonchakov of Russia. Simonyi will return to Earth with the Expedition 18crew on April 7.

Padalka, a Russiancosmonaut who previously commanded Expedition 9 in 2004, will be the firstperson ever to command a space station crew twice when he takesthe ISS helm during a change of command ceremony planned for April 2.

"Space station is a good example, very outstandingexample, [of] how people can work together, can cooperate together, just usingdifferent technologies, we can supplement each other," Padalka said in apreflight interview. "And thank God all our nations, at last ourcountries, our agencies and people themselves, have matured in their ability towork together in space on behalf of all mankind."

Simonyi plans to spend his foray at the station conductingscientific research, doing educational outreach activities, and taking photosof Earth. Simonyi booked this trip through the U.S. firm Space Adventures,paying $35 million to the Russian Federal Space Agency for the chance to take asecond vacation to the orbital outpost. Simonyi's first trip to space was in2007.

"We're looking veryforward to welcoming them aboard in just a few days," Fincke said."It's going to be great to have them on board. Congratulations on anotherpicture perfect launch."

A few hours after docking, the three incoming spaceflyerswill open the hatches between their craft and the station and be greeted by thecurrent ISS residents at a welcoming ceremony scheduled for 12:10 p.m. ET (1610GMT).

The 12-day crew exchange will be a busy time filled withscientific research activities and training for the new arrivals. ?Wakata, whoarrived at the ISS March 17 on Discovery, will stay on to join the newExpedition 19 crew as a flight engineer. He is serving as his country's firstlong-duration crewmember.