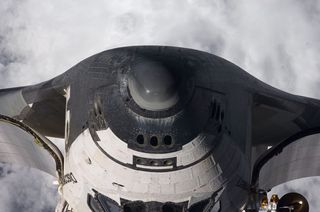 A close-up view of the heat shield on space shuttle Discovery's nose was provided by Expedition 18 crewmembers on the International Space Station before docking on March 17, 2009 during STS-119.
(Image: © NASA.)

CAPE CANAVERAL, Fla. -Shuttle Discovery will make a fiery plunge through the atmosphere this weekend,serving as a hypersonic test bed for new heat shield tiles that might be usedto protect astronauts on NASA's next-generation spacecraft.

Flying Discovery upsidedown and tail-first, missioncommander Lee Archambault will fire twin maneuvering engines Saturday,slowing the shuttle enough to drop it out of orbit and into an hour-long freefall through the atmosphere.

The ship will flip,pointing its belly in the direction of travel, and the compression of smooth-
flowing air around its leading edge will forma protective blanket around the orbiter.

Then a specially designedtile with a built-in "speed bump" will trigger turbulent airflow,increasing re-entry heating. The anticipated temperature increase is only 15 to20 degrees, which is not enough to cause damage.

The idea is to see if thecandidate tile is safe to fly on the Orionspace capsules, which will encounter temperatures of up to 3,400 degreesFahrenheit as astronauts return from missions to the moon, Mars and othercelestial destinations. The shape of the Apollo-like capsule will result inre-entry temperatures 500 degrees above those encountered by the shuttle, whichis slated for retirement next year.

Discovery and sevenastronauts are scheduled to land at Kennedy Space Center at 1:38 p.m. Saturday -about five minutes earlier than previously calculated. The deorbit burn isscheduled for 12:36 p.m. that day.

Returning shuttles normallyexperience this disruption of supersonic airflow when the velocity of theorbiter drops to around Mach 8 or Mach 10.

The switch from smooth toturbulent airflow is a phenomenon known as "boundary layertransition," and any bulge or protrusion on shuttle heat shield tilescould trigger it. NASA engineers call this "tripping the boundary layer."

If it occurs early inre-entry - when the velocity is higher - the tiles are exposed to greatertemperatures for longer periods of time. Resulting damage could breach theorbiter's heat shield, endangering the spaceship and the astronauts aboard it.

The presence of twoprotruding pieces of fabric - so-called "gap fillers" between tileson the belly of the shuttle - prompted NASA to order an emergency spacewalkduring the agency's first post-Columbiatest flight in 2005.

The special tile onDiscovery is an improved version of original shuttle tiles. It was installed onthe underside of the orbiter's left wing. Its built-in "speed bump"is 4 inches long and sticks out about a quarter of an inch. Temperature sensorswere installed on that tile and nine others downstream of it.

NASA computer modelsindicate that the "speed bump" will trip the boundary layer as theshuttle slows to Mach 12 or Mach 14.

The transition from smoothto turbulent airflow is expected to occur as Discovery soars over the Gulf ofMexico on its way to KSC. A Navy NP-3D Orion aircraft will fly below theshuttle and use an infrared camera to monitor heating on the underside of theorbiter.

The imagery and data fromthe temperature sensors will give engineers a better understanding of thephenomenon, predicative models will be improved, and NASA engineers willdetermine whether the upgraded tile - or a version of it - might be used onOrion spacecraft.

"There are a lot ofpositives to this small test," Shannon said. "It's a great test tounderstand in a controlled manner the flight environment for re-entry."